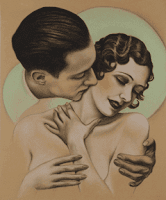 The current season of plays at the Alma is Directors' Cuts, the annual showcase for BOV Theatre School graduates. The Yalta Game by Brian Friel, the choice of Timothy Howe, begins as an apparently frothy seaside romance as dandy flâneur Dimitry, whiling his days away in inventive gossip, nets another lonely young woman with his 'game' of people watching. “These categories – public, private - authentic, deceptive – are never as separate as we think” Dmitry tells the audience, and deceptive simplicity in the script plays with notions of self-perception, lies and longings. The clever set supports this sense of unreliable narration: it's a giant postcard, which unpacks into furnishings to create the reality Dimitry and his lover inhabit. But did this brief encounter really become the love of his life? Did they meet in Moscow, and dance, and kiss..? by the end we don't know if anything is real, even the dog... Witty direction and crisp acting brought out every nuance in a delightful production.

Baroque, beautifully staged and performed, with stunning music: all the hallmarks of Mark Bruce Company productions are intensely present in Made in Heaven which opened at The Tobacco Factory this week. There's more of sea than sky about this story ~ billowing satin waves where a mermaid loses her tail to a knife, a nun loses her head to a shark ~ but for Mark who wrote, choreographed and directed the show, the connections are symbolic. “A lot of things come from my subconscious," he says: "Characters come from Paradise, then you take them away.” It's a filmic world too, with references ranging from the crazed robot cop in Westworld to Judy Garland-esque prairie girls. Music is equally eclectic: Debussy and Chopin, Cohen and Leadbelly, White Stripes and Sonic Youth. It's violent and vengeful as well as sublimely beautiful, and dream-imagery like the angel baby, the butchered mer-tail, and severed head hacked by hockeysticks, is unforgettable.

Despite the fact my personal cosmos recently seems to have shrunk to Bristol and the road to Bristol from Frome, I haven't forgotten there's a wider world out there, with more than a few problems. Like every grecophile, I'm waiting and watching, with hope as well sadness and concern, for some resolution to the current crisis. Skyros holidays organiser Yannis Andricopoulos, who has written a trilogy of books on the significance of Greece and Greek culture, is following events in his blog, where he also pledges "We’ll not cancel Skyros holidays, whatever happens either in Greece or in the world! So book with confidence - you’ll have a great time, and give the Greeks the support they need in their most testing times since the war." 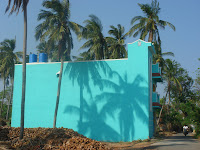 Local writer Niamh Ferguson, back from India to the delight of her Frome friends, is paying tribute to the power of the daily journal: her 'morning pages' morphed into emails that tell the story of her fascinating journey ~ to be published next month under the title Love From India. Watch this space for launch details!
Posted by Crysse at 12:00 PM

Email ThisBlogThis!Share to TwitterShare to FacebookShare to Pinterest
Labels: Made in Heaven, Skyros, Yalta Game