Waiting for Wilmot, written by extraordinarily talented playwright Steve Hennessy as an ensemble production for his Stepping Out Theatre Company, opened this week at The Brewery. It's an incredibly brave play, which often means 'doesn't quite work' but in this case means it's courageous and successful too. More than a moving tribute to a valued member of the group who died two years ago, it's a tribute to the whole team, and to the power of creativity and comradeship, and a deep, often painful, sometimes hilarious, study of the nature of grieving itself. "It might be a bit bonkers, but Ian's story is the story of the group" says Steve, or one of him (there are four), urging his crew to go with him into the underworld where actors' characters lurk after the plays are over, to contrive their friend's resurrection.
We find out what we want to say by writing it, Alan Bennett said. And what is especially powerful about this play is that while it explores frankly, obsessively, possibly even egomanically, the writer's own grief, it also allows the individual talents of this disparate group to genuinely shine. The magic, the songs, the comedic action (special merit award to the Chekhov-mauling seagull) are all gems. 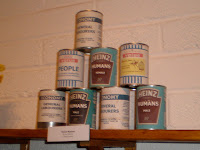 Steve's chronicle of his beloved friend never lets us forget the elephants in the room - the drinking, moodiness, paranoid insecurity - but there are golden elephants there too: Ian's luminous artwork - stained glass, ceramics, witty installations and illustrations, eloquent photographs. A glorious tribute not only to Ian Wilmot but to anyone who ever survived, or died in the attempt. 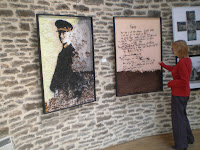 Frome's Black Swan Gallery is full of impressive art works too, submitted for the 2010 Open Exhibition. Winners have been picked, but the 'popular vote' hasn't yet been counted. Mine goes to an amazing diptych created from burnt matches entitled The Pity of War, by Michelle Cioccoloni - a larger than life portrait of Wilfred Owen together with the preface to his war poems: "This book is not about heroes. English poetry is not yet fit to speak of them. Nor is it about deeds, or lands, nor anything about glory, honour, might, majesty, dominion, or power, except War. Above all I am not concerned with Poetry. My subject is War, and the pity of War. The Poetry is in the pity."

Diary date alert - July 9th to 18th is the Frome Arts Festival which will as ever feature a diversity of spoken word events, from talks and readings to workshops and performance. Brochures not due out till early May but you can check out some of our events online here.

And finally: have I got Have I Got News For You news for you... The Co-op is changing the name of one of their products: Ambient Sausage Rolls will be renamed without the adjective after officials admitted they didn't know what it meant. It was an administrative error, a spokesperson said, caused by labels being printed in the in-store bakery. Presumably the design department were all busy baking buns.
..
Posted by Crysse at 11:59 PM

Email ThisBlogThis!Share to TwitterShare to FacebookShare to Pinterest
Labels: Black Swan, Stepping Out, Waiting for Wilmot