'Shakespeare at the Tobacco Factory' is following the Dream with The Tempest, where a very different magician controls events far darker. Prospero, brooding endlessly on vengeance, has no faerie queen to tiff with and only two sprites for company: ethereal Ariel and brutish Caliban.
So why, you might wonder, does Ariel play Caliban - or rather, the same actor play both? I wondered too, until the final scene when Prospero turns to his crouched monster-slave and frees him with the speech to Ariel, and every bipolar anomaly in this harsh story fused suddenly in a profound sense of emotional resolution. Well it did for me. A fine production in the old-school tradition: impressive visually, and with a strong team of excellent actors. Miranda and Ferdinand (Ffion Jolly and Benjamin Askew) brought riveting conviction to their unlikely romance, the villains were vicious and the buffoons entertaining - especially Felix Hayes, an unforgettable Wall in the previous production, as the jester Trinculo.
(Thanks Graham Burke for the pic of Christopher Staines as Ariel. And Caliban. And, with big vanilla-blancmange breasts, as a table-top raver in the Masque sequence too.) 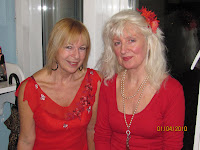 Lucky Dip was the theme for the second STAGE WRITE evening of readings at the Merlin foyer and to the delight of Niamh and I as co-hosts, the event surpassed even the success of 7 Ages of Shoes last year. The foyer was totally crowded and response was enthusiastic, and the readers were all just brilliant. "Enjoy an evening of varied styles: funny, poignant, often surprising, always authentic" we put on the flyer, and the stories were, and the audience did. Mega-thanks to Deborah, Jill, Alison, Linda, Annette, Audrey, Magnus, Rosie, Kevin, Laura, and of course Niamh - and to all our appreciative listeners who turned out on a sleety night to support spoken word and creativity in Frome. We couldn't have done it without you. 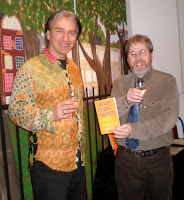 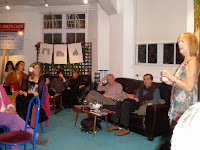 Standing room only at this month's Garden of Awen for a lively gallimaufry of spoken word. Dave Lassman led off with a champagne launch for his book on the Art of Self Publicity (check Wikipedia to see how good he is at this) followed by performances on the night's theme of fools and tricks. As guest poet I really appreciated the supportive energy of the audience, and there were some great contributions from the floor - songs by Ali George, and an amazing impro of random thoughts about Bath co-ordinated by Ben for his project on collecting the vibes of a town through unpremeditated lyricism... looking forward to that on Youtube. Which reminds me the animated version of my poem Onomatopoeia has 4925 hits currently - I'm hoping it'll reach five thousand before the end of the month (hint hint)
..
Posted by Crysse at 1:30 AM