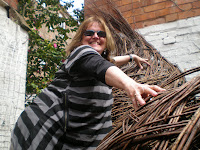 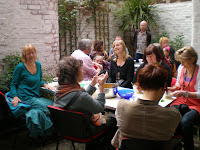 To Bridgwater for a day reflecting on the how-where-what-why of stories, described as 'a feast of story-telling in its widest sense' by organiser Tim Hill who is Outdoor Celebratory Arts officer for Thrive Somerset and also provided the feast of homemade bread and soup for lunch. What are stories? Perhaps we never decided, but this was a rich day in terms of ideas and creative camaraderie as as participants from across Somerset and beyond shared stories and strawberries in the sunny garden of the Arts Centre.

Home of the Wriggler probably sounded quite good at the planning stage.
An abandoned car factory, what tales that could tell! Think of all the people whose lives, over the years, were dominated by the motor industry, imagine fragments of their stories threaded together to show the heart-beat of a community, a kind of Under-Milk-Wood but from the dark of a disused car works - and best of all, the actors will generate their own onstage lighting by peddling a giant bicycle, which will be ironic as well as ecologically radical. You can see why Stan's Cafe thought they were on a winner with their new show. The reality was that staring into Stygian gloom while four people gossip about humdrum lives of far too many names to follow, sadly, palls after about as long as it takes to think Ooh they're generating their own onstage lighting, how very ecologically radical and ironic. Which is about an hour short of the running time.

With so much theatrical stuff taking my attention recently, it's ages since I was last at a poetry reading. Poetry Can is organising the Bristol Spring Poetry Festival so Emily and I went along to the Arnolfini to listen to George Szirtes, supported by Peter Bennet and Rita Ann Higgins. 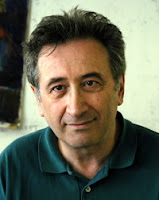 Szirtes came to England from Hungary aged 8, after the 1956 uprising; he writes of displacement and madness and how 'being ordinary is the extraordinary thing', complex ideas and simple words, gorgeously crafted. The election was mentioned only once, at the end, when the compere suggested that "Poetry provides some redress." Well... consolation and inspiration, yes, but no remedy: Like Szirtes said,
We are the poppies sprinkled along the field.
We are simple crosses dotted with blood.
Beware the sentiments concealed
in this short rhyme. Be wise. Be good.

"The art of writing is to explain the complications of the human soul with the simplicity that can be universally understood" Alan Sillitoe wrote, quoted by poet Ian McMillan in his tribute to the author who died this week. Sillitoe's seminal novels Saturday Night and Sunday Morning and Loneliness of the Long Distance Runner made stars of Albert Finney and Tom Courtney, and nearly 50 years on he inspired the Arctic Monkey's 2006 debut album: Whatever You Say I Am That's What I'm Not.

And finally: a year on, One-And-Other have moved all their webcam stuff to the British Library archive so my Plinth hour will be archived forever, theoretically. In fact although I'm credited with 139 "Like!" hits, my slot ends after a minute - there's more here as I manage a shout-out to end the war in Afghanistan before being JCBd away...
..
Posted by Crysse at 11:59 PM