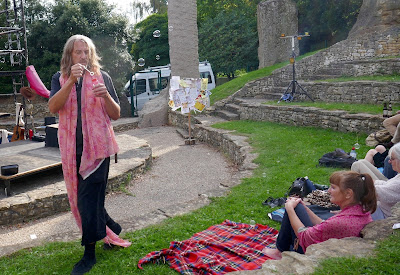 To be honest, the promo for The Spirit of Woodstock on Frome's ECOS amphitheatre: "Award-winning Something Underground are bringing you their latest open air stage show over two wild and immersive hours - the politics, the conflicts, the music, the protests, the moon landings, the civil-rights movement, the adverts, the drugs, the music, the musicians and the personalities, all imbued with the soundscape of this incredible era." - combined with a winsome image of a Twiggy-lookalike with sequins round her eyes, didn't really prepare me for the solo show that transpired.  There were 32 bands at  Woodstock in August 1969, but writer/performer Jonathan Brown managed easily twice that number of characters in his long (slightly overlong in the second half) re-imagining of that legendary end-of-the-60s era. 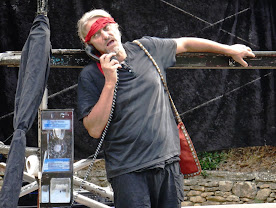 Described by its creator as a 'semi-immersive theatre collage' this awesome feat of multi-memory never flagged in energy and the cameo characters were entertaining. Jonathan's performance is mostly direct to audience, sometimes demanding our participation, and his myriad roles range in mood from an entertainingly stoned festival-goer to the angry passion of a Vietnam veteran.

It was a hugely impressive feat for a one-man show: evocative for those of us who remember the era, the imaginative collage of characters would be informative as well as entertaining for those who don't. (And to assert my credentials for reminiscence, here's an image of me in that year - that baby isn't mine btw though I did have one by then.)
Still in theatre mode: over to Wiltshire now where September in the Rain, probably aptly, is the choice of Salisbury Playhouse for their upcoming production as theatres cautiously reopen their doors with fingers crossed there won't be a repercussion of previous seasons' cancellations - especially as the Playhouse is one of only 45 producing theatres in the country, so this is a bigger deal for the company than for tour-hosting venues. 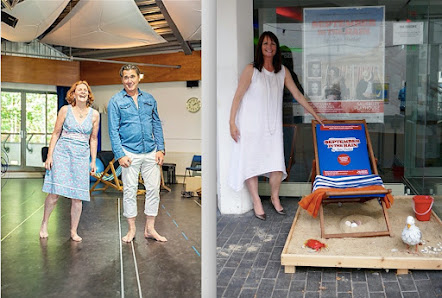 Director Gareth Machin is currently rehearsing this John Godber two-hander with Ian Kelsey and Nicola Sloane, and Wilshire Creative's Development Director Helen Taylor had the fun idea of inviting reviewers to chat with them both over lunchtime snacks - fun for us, anyway, and both actors were charmingly accommodating. My main interest was the logistics of rehearsing in a pandemic. Ian and Nicola both admitted the process was challenging, despite the safeguard of their 'bubble': 'My brain hadn't been used for months,' Ian declared, 'I was practically narcoleptic!'  Opening night is 16th September, with a live-streamed option if you can't make into Salisbury. Here's a rehearsal photograph, and Helen with her doorway display. 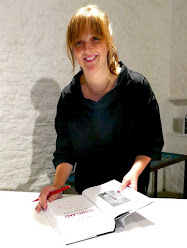 Imagine this: you have an idea for a book so you visit a publisher and show him some pictures you hope will illustrate it, and the result is a commission, 5000 copies sold pre-publication, with a follow-up print of 25,000. This was the real-life experience of Frome's Amy Jeffs as described by her publisher at riverrun, an imprint of Quercus, at the launch of Storyland on Friday to a big gathering at the Silkmill in Frome, hosted by Hunting Raven Books dynamic manager Tina Gaysford-Waller. Amy herself was too endearingly modest to say much more than thanks to everyone, and to Frome itself 'for the culture of independence, and encouragement that you can do this.' Here she is signing my copy of this compelling retelling of our ancient history, with mesmerising linocut illustrations by Amy too. There's an excellent review here.  And here too is the bookshop frontage as temporarily decorated by Amy. 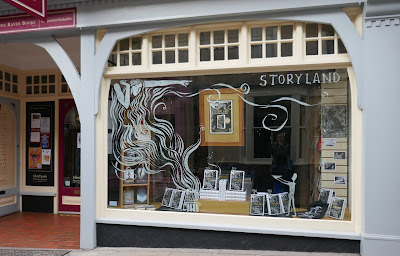 Also on a bookish theme: Frome Writers Collective hosted a social gathering on zoom this Thursday at which I gave a ten minute chat about short story writing, and the Proof Pudding club met at River House on Sunday evening to talk about some of the new publications arriving in Hunting Raven Books and eat cake. I was lucky in my proof pick: The Status Game by Will Storr is a well-argued and ultimately positive analysis of this pervasive aspect of social psychology. 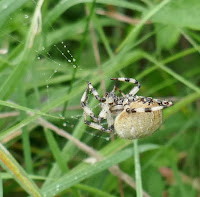 Other than theatre and books (and a couple of parties) this week has been mainly about walking and bees. Rodden Nature Reserve is now officially open to visitors until March, when the breeding season starts, and another highlight of my peregrination was a rainy visit to Easthill Field, where the long grass was a fairyland of glittering spiderwebs. This one's a wasp spider, a newish arrival in England, with its sac of eggs - apparently the female often eats the male after mating.
And finally: for those on tenterhooks since last week's revelation of Frome's assault on the world record: Pending final verification, local charity We Hear You will enter the Guinness book of records after 8 hours and 671 players completed the longest & biggest ever, in the entire world, game of skittles.
Posted by Crysse at 11:08 PM