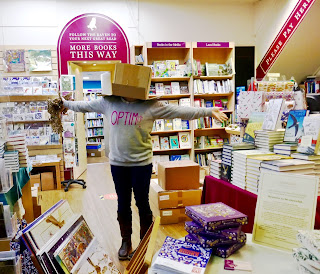 Let's start with an image that shows how we're all feeling, as modelled by Hunting Raven Books marvellous manager Tina Gaisford-Waller at the end of a long day coping with phone & email orders. The legend on her jumper, you may notice, reads OPTIMIST. With a massive stack of quirky wrapping and sturdy paper bags at the ready, we're hoping this brilliant bookshop does really well in the season ahead. And if you want to shop for other stuff to support Frome's creatives, join Friendshop, here - loads of unique art & wearable posted by craftsfolk - and authors - of Frome.
Still with words, Frome Writers Collective monthly social on Thursday had a spooky theme, perhaps apt in a week when 'shape-shifting creep' was trending on twitter, with short stories shared at the zoom meeting. 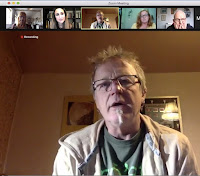 And individuals are offering virtual gigs again in response to the renewed lockdown - and no apologies for my sample choice of  Steve Pottinger and Luke Wright as both these brilliant poets have visited Frome to perform in the Poetry Cafe. Steve this week was hosting a set in Dubai, although his presentation and material stay firmly in the Black Country.  His poems are inspired by actual people and historical events, but also wildly imaginative as he word-shifts from the ordinary to the fantastic, always with a strong sense of the human struggle right across the range of his work. 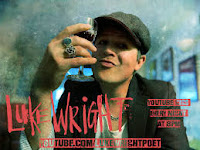 Spoken-word poet Luke Wright, too, has this ability to convey poetic experience as deeply personal yet also universal. Luke is is offering his poems every night throughout November at 8pm on his twitter feed, for free (though donations appreciated.) Luke doesn't seem to work from a set list, you get what he's in the mood for. On Thursday this seemed a little bit cynical & sad, but he finished the set with a really beautiful poem about his little boy in bed reading, existing in his solitude 'steady as a rock pool' .

Frome's fabulous Liv Torc was in the zoom room on Tuesday for Haiflu Ever After, talking candidly about her year of troubles & triumphs, about the international haiku-writing project she launched, and also about her serious illness (which led to 2 brilliant poems of cuckoo-nest flying craziness). Liv's audience rapport is as instinctive as her poetic talent and this hour was inspiring as well as entertaining: Liv wants more haiflu now, and hopes you'll post them publicly, and share them on social media... so look out for #haiflu2020art, and join in if you'd like to feature in her next film. 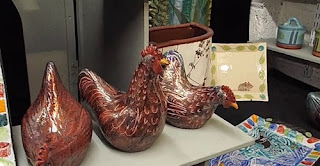 Visual art now : The Cam Valley Arts Trail went virtual for the first week of November with 32 artists presenting their paintings, prints, pottery and beads: Here's some of Frome's Andrew Eddleston's varied ceramic work - you can see more in his a Youtube movie here. Apologies for the belated notice - events across the Atlantic have been a bit distracting)

Performance taking teetering steps back into the live world has, of course, been stopped in its tracks. Theatre Royal Bath's costly 'Welcome Back' season of three great classic dramas was halted after the first show (Pinter's Betrayal) and Bristol Old Vic is working out live-streaming from the stage for Hedda in order not to postpone their new collaboration with the BOV Theatre School. Future productions will also be semi-streamed, with a few seats available in the theatre. 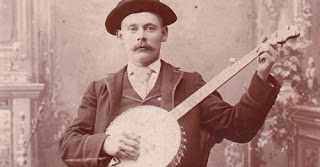 Music events, like drama, have been hard hit. Individual performers continue to use the easy-access site Open Micsolate - you'll find several Frome favourites there - or posting directly on their own pages, like Nick van Tinteren, awesome lead guitarist with popular Bristol band Cut Capers. This is the image used by Paul Kirtley on quite a few of his posts - this one is Go With the Flow, recorded with David Goodman, a great example of impro jamming. Al O'Kane's poignant new song Black Lullaby, written in response to the current situation, was released on Friday 13th, with  a short taster here and Sara Vian's offered a new song Trust the Sea 'to celebrate the result of the USA election.'  The Summer of Sound project is now archived on Frome.FM and my contribution, a revival of the Liquid Jam CD of Frome poets produced by Will Angeloro 20 years ago, is online here. This really is an excellent little radio station with a wide range of range of music, from eclectic mixes to fan specials like Foo Fighters Top Tracks, all available in their archives - lockdown is maybe a good time to browse.
Ending now with the Frome Walking Festival, also bludgeoned by new restrictions, but you can still enjoy these themed local walks by downloading the routes, each with maps and information, varying from a short, sombre town tour with a focus on WW1 to a strenuous 13 mile trek along the Saxon Kings Way - this one recommends a bus or train for the return! Big credit to the Walkers are Welcome team for keeping this project afloat.  I'll leave you, once again,  with a tree. 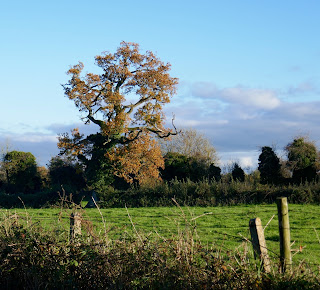