Uncle Vanya was mid-production at the Harold Pinter Theatre when coronavirus interrupted them, but director Ian Rickson reconvened his team to make a film version. Frome's Merlin, ever  aware that 'use it or lose it' is this year's maxim for theatres, promptly booked it for a showing. The cast, with Toby Jones in the title role, are all excellent and Conor McPherson’s adaptation effectively highlights topical issues, possibly overmuch in the environmental-speak attributed to the forest-loving doctor.  Despite its length - it's 2½ hours - and the fact that you couldn't call this a feel-good story, it's really enjoyable... but, like all films-of-plays, frustratingly abandons the supreme advantage of stage: that we can see not just the speaker but listener/s too.  Chekhov was writing about the decline and decay of the Russian land-owning class and Uncle Vanya, like The Cherry Orchard, is poignant because everyone is affected: the best bits for me were when I could see all their responses, rather than just massive facial close-ups like on a game-show.

Moving closer to home now, in fact to Home in Frome, the community group formed eleven years ago to ensure the town's history in terms of work and social life was not lost and forgotten as trades died out. Stories recalled by older community members have already been published and now Working Memories has its own web-page here - a remarkable achievement and a fascinating collection of interviews. A wonderful addition to the public history of Frome.  Still with words: A West Country Homecoming is the title of Frome author John Payne's new book, which - he says - 'explores the possibilities of writing history backwards from the present into the past.'  It's part memoir, part family history, part social history, and illustrated with over 100 photographs from family albums and other sources. This is another from quirky Hobnob Press, run by John Chandler who seems to have become the go-to publisher for Frome writers.

Also from the Hobnob stable (or possibly kitchen), my book The Price of Bread now has it's own Facebook page,  inspired by a staggeringly good review which actually suggests it could be a Booker contender... pick yourself off the floor and read it here. "Rarely have I read a book that casts such an accurate looks at the 60s - an era of free love impossible to imagine nowadays - in the context of hostile social forces." was the encouraging verdict of author & editor Dana Rufolo.

Liv Torc, despite having a tough summer, has again managed to spin Covid straw into words of gold with her latest publication: a collection of poems produced by Siren Poets: What if we can't save the Earth - But if the Earth could save us? Liv guided a group of sixty participants on a 'creative quest to uncover the lessons the Earth sends us, by uncovering sigs and metaphors in nature. This is a stunning little booklet, full of lucent imagery and creative surprises, and it's good to see words from several poets well-known in Frome Poetry Cafe - here's a short sample from Jo Butts, our current Festival Poet Laureate (a title it currently looks as though she will hold forever...) - an actual news story transformed into a thought-provoking haiku:  A young polar bear / devours a sleeping camper / His hunger? Our fault. 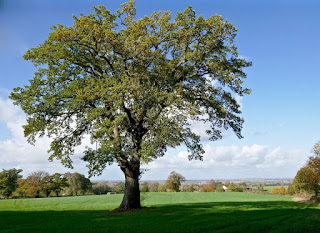 Time for a tree: this oak is just outside Frome, at East Woodland. Sadly, Frome's southern fields are currently threatened with massive development of 1,700 houses, extending from the Mount to the bypass, not only obliterating a breathing space for the town but compounding pressure on basic services like schools, transport, and medical facilities. Not surprisingly there's opposition - not from NIMBYs, from the many in Frome who believe this is actually about planetary survival. If you live in the area, and would like to support the protest, stopsgc is the site. 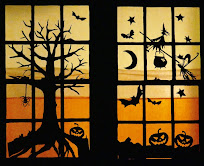 And this post falls at Samhein, with a full moon as well as halloween, and the Frome Window Wanderland too... this brilliant illuminated trail of home-made imagery goes right across the town, with inventive narratives and striking scenarios as well as ghoulish figures.  Witches were quite a theme this year - and black cats too.
Ironically, my second week of self-isolation ends just as another lockdown is about to begin.  Actually, after travelling remote stretches of Spain for a month and catapulting back into busy Frome, much as I wanted to connect with friends, the compulsory tranquility was a chance to absorb the experiences of the journey.  In Africa, apparently, the guides hired by European explorers would stop every few days to wait for their spirits to catch up with them. Another month without live arts will be a stretch, though... but one of the compensations of winter evenings is rediscovering telly, and programmes like Portrait Artist of the Year on Sky Arts.  I leave you with Stephen Mangan... you lucky people. 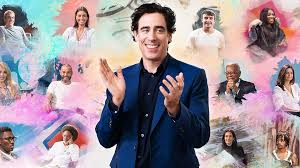