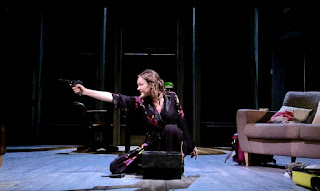 Creatives have been hard hit by this second lockdown, especially theatres. Here in the south-west, Theatre Royal Bath had no sooner re-emerged on the strength of handouts from the Culture Recovery Fund than their 'Welcome Back' season was paralysed again, but Bristol Old Vic enterprisingly added a live-streamlining aspect to their new productions. Hedda, created via the 'permeable membrane' (their term) of their Theatre School.  Chekhov's dramatic principle asserts that if a gun is shown in the first act then it must be fired before the end of the play and Hedda has two, which, combined with her self-destructive boredom, ensures no surprise in the finale here, even if you're not familiar with Ibsen's play. 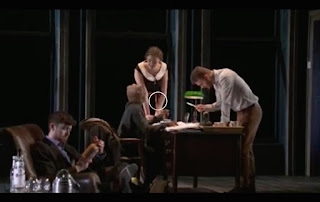 The filming angles were great, with plenty of full-stage views rather than soap-opera-style  close-ups, although for some technical reason there were also plenty of blurred moments while my system played catchup. Lucy Kirkwood's adaptation transfers the story to contemporary Notting Hill so some changes are essential (though possibly not Hedda eating the lost book) and the trainee actors did justice to the vying, lying, academics - Hedda's husband George and Michael Drake as handsome ex-lover Toby were particularly strong, and so too was Emma Hadley-Leonard as the woman who fascinated and enthralled everyone except herself. 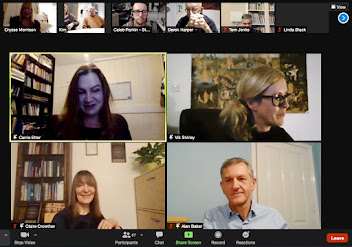 A Friday night of verbal immersion now as four remarkable poets launched their new collections on Zoom: Frome's Claire Crowther and Bath's Carrie Etter were joined by Alan Baker and Vik Shirley in an extremely well-organised hour of fascinating readings. Alan, an editor & translator as well as poet, was launching his new pamphlet A Journal of Enlightened Panic, Vik's debut collection is entitled The Continued Closure of the Blue Door - samples of her work here - Claire's latest collection Solar Cruise has already been picked as Poetry Book Society recommendation. Claire is married to the renowned solar physicist Keith Barnham & these poems, all written on their sea trip to America, focus on meditations around his work - there's a sampler here and  some have been reprinted in the Fortnightly Review.

Carrie's new collection is The Shooting Gallery published by Verve, extraordinary and sombre prose poems juxtaposing reflections on the WWII drawings by Czech artist Toyen with school shootings since the Columbine massacre in 1999.  These are also featured in the Fortnightly Review, but it was particularly powerful to see some of the drawings that inspired these pieces as Carrie read them with moving calm.

Frome Writers Collective's Writers on Radio session this week was on 'the art of revolting, and writing about it,' and opened with an interview with David Lassman discussing why Frome is famous for its riots - mostly legitimate protests, incidentally, as the food riots were inspired by the inflated price of bread, the 3-day riot at 1832 election was in response to blatant corruption, and the wool-workers attacks on new machinery were protests at the loss of essential income for the spinners. David doesn't emphasise rationals but he's really interesting on the facts. (Here's David in a clip from the Wessex Camera Club's coverage of our 'Rogues and rebels' walk in the last Frome Festival.) Among other intriguing features, Sian Williams recalled the 1980s Greenham Women's protest, and Suzy Howlett considered the etymology of 'riot' - the language of the unheard, as Martin Luther King so perceptively said. Good to hear Kaiser Chiefs' riot prediction again too. 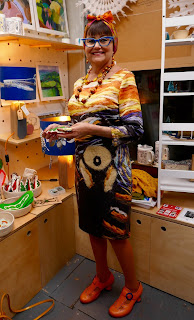 Maybe because we all feel under partial house arrest, dissent seems to be in the air: Eleanor Talbot interviewed me this week about the thread of dissent that runs through my book Frome Unzipped, from Prehistory to Post-punk for her weekly show Variations on a Theme. Unlike David, who is reliably lucid,  my recall of dates is impeded by dyscalculia, unhelpful when discussing history... luckily Eleanor is a brilliant interviewer & editor. I'm on Episode 58, at 24mins-35.10, 46mins for 12 minutes, and again for 9 minutes at 1.09 - but you should listen to Eleanor's brilliant music choices too, like the sensational History Song from The Good the Bad & the Queen and (at 1.33) an amazing rap battle between Trump & Biden created from actual speeches by ERB (Nice Pete & Epic Lloyd). All seamlessly fused by Eleanor, here seen at the WHY gallery opening last year - another from-the-festival-album image.
Still with social conflict of a kind, the Workhouse Burial Ground walk mentioned in previous posting, one of Frome writer John Payne's projects, had a plug in The Guardian this week. This would have been one of the Frome Festival events, and John's pamphlet of poems The Few and the Many includes two tributes in remembrance.  And with live music on hold, we continue to  rely on Sky Arts, youtube, and downloading: this is Destination Unknown, by Pete Gage with Ruzz Evans on guitars and Mike Hoddinott on drums, from Pete's new downloadable album, with great advice in the title track: if you don't do it now then you never will.
Ending this week's foray with an image from the extraordinary Oudolf Field at Bruton's Hauser & Wirth, where inspired planting has created a landscape for all seasons: the opulent colours of spring and summer morphing to a different glamour by late autumn, with starbursts of moon-pale grasses, russet stems of seed pods, and a few late, mulberry-dark, flowers. 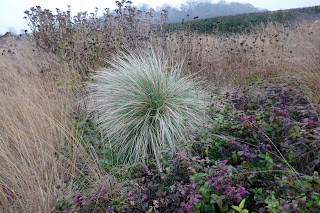 Love the pale moon grass at Hauser. I keep meaning to go there for a walk someday...