theatre, art, music words - the 'Back in Business' one! 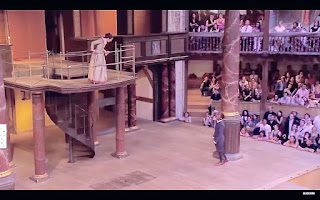 When theatre goes real-time live again, these free treats from London's costliest theatres will be much missed- do grab them while they're around. The Globe's offering this week was Romeo and Juliet, weighing in at just shy of three hours but superbly performed - Rebekah Murrell as Juliet and Petra Letang as her nurse especially brilliant - and thrilling viewing (unless you're one of the students whose laments that an English lesson is only supposed to be hour long littered the comments online).

Dominic Dromgoole's direction brings out the unruliness of the rival gangs and the youthfulness of the lovers, both initially naive in their notions of romance until sobered into the harsh reality of transgressing clan rivalries.  The sword fights are thrilling but have been filmed rather too close to follow the vital dynamic leading up to Romeo's fatal thrust, but overall there's good coverage of audience excitement. 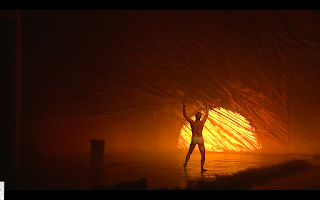 Thursday night's National Theatre offering of 'Danny Boyle's monster hit Frankenstein with Benedict Cumberbatch as the creature and Jonny Lee Miller as Victor Frankenstein' was as unforgettably amazing as you'd expect from the first two names. Unforgettable especially for the long opening section of electric birth through the creature's long lonely struggle to articulate movement and sound, watching the thing grow into a humanoid and then a lover of poetry and a philosopher under the tutelage of the blind old man: this was full of charm as well as poignancy.

When this connection is abruptly broken by the seeing world and the quest for vengeance begins the trajectory is set steadily for melodrama. Mary Shelley's tale of the motherless creature, completed while living in Bath, is a psychological drama as much as a monster story, and the parallels with her own life in terms of loss and disregarded needs are plangent. This brilliant interpretation of a timeless tragedy is on all week, well worth viewing.

Bath Festival went virtual too, with a varied menu of free options including Grayson Perry's Art Club, in which he invites viewers to submit their own work, with the chance of  inclusion in his next real-time exhibition "when this is all over." His theme this week is portraits: here's one that artist Nathan Wyburn made of him, using soy sauce and noodles. Grayson was also much taken with the latest trend on facebook, even more popular than the 'ten-albums-that-define-me' one: Recreate artworks with things you find at home now has over 50,00 members and there are some fantastic efforts out there - if you haven't started following yet, you're missing a treat. And in the Golden Oldies corner. Channel 4 is releasing to the world 'Bingeable Box Sets' of comedy classics - every series of Seinfeld, and Father Ted to name but two.

As always there's masses of music online - if you don't have enough of your own favourites tune into Visual Radio Arts where Phil Moakes and Maggie Gregory continue to add new shows: here's No Fixed Abode who played last week.

Sofa continues to stream international acts for free viewing, and individuals musicians are increasingly posting on facebook: Martin Dimery, ex Sergeant Pepper's Only Dartboard Band, has made several of his Beatles songs publicly viewable. Here comes the Sun is one of my favourites.  Frome's jazz-fusion giant John Law offers a preview of his new album CONFIGURATION here prior to its release, and looking wider, Radiohead has posted their archived tour concerts. 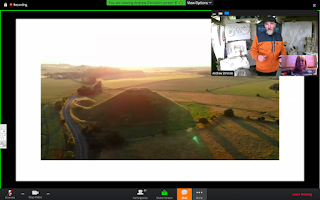 Words now, and a fascinating talk from Andrew Ziminski's from his workshop organised on Zoom by Pippa Goldfinger, describing his work as a stonemason, with a focus on the landscape of Wessex. His slide presentation included discoveries from neolithic sites including Avebury, Fyfield Down, West Kennet Long Barrow, Silbury Hill Stonehenge and was supplemented by workshop demonstrations of skills like creating sarsen polishing stones and repairing the carvings in the temple of Sulis Minerva. Buy the book, if you haven't got it already! 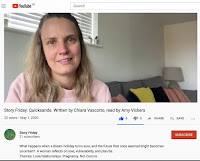 From fabulous fact to intriguing fiction, with Bath's Story Friday, the popular community platform initiated by mega-skilled Clare Reddaway, went online last week and continues its Friday evening sessions on the theme of 'Dark Clouds, Silver Linings' read by a team from Kilter Theatre. This week's set included a story from Chiara Vascotto, whose sensuous, visceral, personal style I remember from last year in Skyros. You can listen to her story, read Amy Vickers, here, along with five other intriguing short tales - one by Clare herself.

Liv Tork, indefatigably innovative and creative, continues to collect submissions of 'haiflu' (haiku in time of plague) to create weekly compilations: here's week 6 online, sombre but plangently sincere. Meanwhile Frome Poetry Cafe  is open for any original poems, especially with some tangental connection to 'revenge or redemption (which happened appropriately to be our theme for April) as the page becomes virtual 'open mic' for lockdown times. 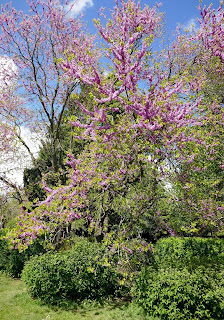 And as April moves into May in Frome, where we're lucky enough to have lanes and footpaths close enough to walk miles in any direction, I'll end this week's roundup with images of blossom - the wonderful Judas tree in Victoria park, and a small burst of the hawthorn blossom brimming on every hedge. 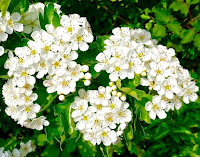