Starting the week with another Shakespeare play, Macbeth, in contrast to last week's epic at the Globe, was a streamlined version of how to change the fate of dynasties: monarchs speedily despatched, soliloquies with no lingering,  ghosts keeping up a good pace and witches not lurking about waiting for a forest scene, just leaping in.

Characterisation was novel too, as if director Cressida Brown had started rehearsals with a warm-up exercise asking the cast to 'pretend it's a comedy' and then was so tickled by the Private-Walker-cockney-style Banquo of Samuel Oatley and the Harry-Potter-geek that Aidan Cheng created as Malcolm that she said 'Don't change it!' and they didn't.

And, live on twitter, the ever-entertaining Luke Wright, who is reading poems for about half an hour every night at 8 o'clock. They are his usual droll observations of life and quirky character studies, with a bit of amusing banter in between - just like his live shows, in fact. It's free, but donations welcomed - as with every performance as our valuable Arts culture faces an ever-more difficult future.

It's difficult to keep social media out of an social-arts blog these days since, apart from TV (I've just discovered Sky Arts) these sites are where accessible things are notified. National Theatre Archives gave us Barber Shop Chronicles by Inua Ellams, imagined stories from six different barber shops moving and funny by turns - makes you wish you'd seen it live! Many more ideas here, too. 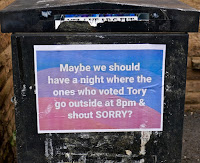 Frome is famous for dissenting, and pretty good at street-art too, so when I spotted this sign in our town centre it seemed worth a wider audience.  It's become my most popular online post ever, and has been shared (at last check) 2,683 times. So this is a revival of my brief 'little known characters' spot which began as a blog filler and then faded when the internet took control of our waking days: Whoever stuck this on what appears to be an old meter box, at the bottom of Gentle Street, take a bow.

And on a more serious note, despite protest and pre-empting a currently-disputed planning permission, many in Frome were sad and shocked to find to a protected meadow alongside the river has been illegally levelled. So this post concludes with a thought from John Clare, from his 1827 poem The Mores - and on a happier note, a picture of a glorious holloway from one of my rural walks.

And birds and trees and flowers without a name
All sighed when lawless law's enclosures came
And dreams of plunder in such rebel schemes
Have found too truly that they were but dreams. 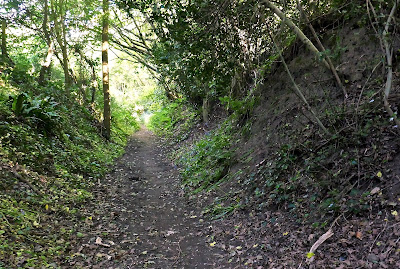