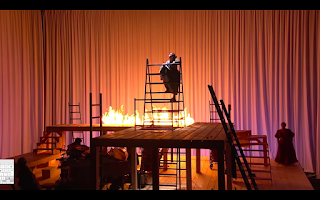 A golden-oldie moment to start with: it's six years now since Bristol Old Vic staged their epic 2-part marathon version of Jane Eyre, directed by Sally Cookson who vividly reimagined the story of a girl who went from poor beginnings to richly traumatic endings, adding music, physicality, and humour all of which made definite improvement to the plot. This wonderful production has been abbreviated for the National Theatre Live online performance to under 3 hours of riveting drama, and was available all last week. Well-judged filming maintained the full-stage special effects, from the dramatic fire (see screenshot) to the delightful jogging-coach journeys, and the growing passion of Mr Rochester (Felix Hayes) for Jane (Madeleine Worrall). These free sessions are well worth checking out if you're missing live theatre.

Rainbow Fish Speak Easy is a regular live poetry event that dynamic and mega-talented Liv Torc hosts in various venues, supported by Take Art, and organising this as a Zoom event on Thursday was an undertaking of major complexity but clearly worth it. Fifty spoken word fans enjoyed two hours of word play - including Liv's invention Haiflu

(which has now even reached Womans Hour!), concluding with a reflective piece performed with piano by Chris Redmond and a compilation-poem of audience responses.  'We are a community,' Liv says, 'and this has been a very special night.'

By now, most people will have their own selection from the incredible smörgåsbord of online opportunities opening up like wild garlic over the last few weeks.  Here's a small posy:

Time Out Frome has some excellent music options - Soundcheck has been posting regularly: - there's a storming Nirvana cover from Al OKane here, and Phil Cooper is offering regular live streams where you can join in & chat.  Bath Festivals are offering a range of arty options, including an Andy Warhol exhibition tour, while Bristol Old Vic is offering an Open Stage for your own ideas: "your opportunity to share the things that nourish, encourage and amuse you during isolation - a song that cheers you up, a film you’ve made in your kitchen, a photo of your favourite place, a picture you’ve painted, or a poem that reminds you of someone you love, we want you to share anything that feels important to you during these strange and mood-bending times."  And if you're over 70, you might be eligible to submit to the King Lear contest for poetry, art, drama and fiction. 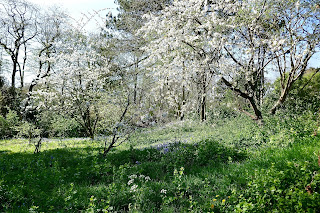 Last week's stunning sunshine was perfect for  solitary exercise  to enjoy the blossom and bluebells abounding Frome and surrounding villages. My best walk was new route of about nine miles, including tangental explorations: over fields to Nunney, along a river path and farmland to Whatley, and footpaths & lanes via Egford back to Frome. If you don't know the terrain you won't be particularly impressed, but for someone with no sense of direction (viz, me) it was thrilling as well as visually and sensually gorgeous. 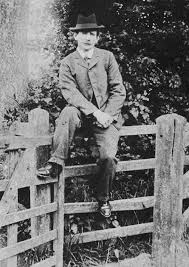 Finally: My-Blog-in-lockdown's new spot 'Little-known personality' this week is Robert Noonan, who provides the April caption in the Radical Literary Calendar 2020: "Every man who is not helping to bring about a better state of affairs for the future is helping to perpetuate the present misery, and is therefore the enemy of his own children." Of course he's not actually little known, since under the pen name Robert Tressell he was the author of The Ragged-Trousered Philanthropists, one of the most influential books ever written. Scarlett and Sophie Rickard, graphic novelists, are creating a graphic deconstruction of Trussell's novel, titled, Self-Made Hero, due publication this autumn. Noonan emigrated from Ireland to England as a young man, then moved to South Africa where he made a good living as a sign writer & decorator, but at that time his radical socialism wasn't strongly in evidence: he joined demonstrations against using skilled black labourers and, like other well-off whites then, had his own black servant. But by 1910 he was back in England, living with his sister and daughter Kathleen, hoping to emigrate to Canada. He died the next year disheartened by failing to find a publisher for his novel, never knowing that Kathleen's continued efforts would eventually find success. The first edition was truncated into a much 'safer' version but in 1955 the full text was published (584 pages of small print in my Penguin copy), becoming an inspiration across the world and literally life-changing for many: Ricky Tomlinson's succinct, honest, credit to 'the book that changed my life' - here - is impressive.
Posted by Crysse at 12:58 PM