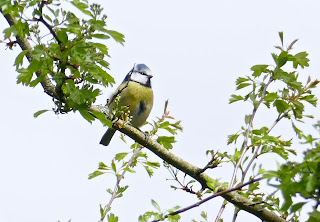 Whatever else we feel about these isolate days, here in Frome we can't complain about the weather. Glorious days for solitary walks, pausing only in legitimate exercise for a quick celebratory photo. My snap-of-the week is this portly little blue tit in Rodden Meadow, who seems to be surveying with satisfaction the burgeoning of spring blossom and foliage all around him.

And in Victoria Park, the Judas tree - one of my favourites in Frome's fabulous tree collection - is now showing buds breaking through from the hard bark. This tree is amazing: the candy-pink bunches of soft blossom burst straight from the trunk and branches without waiting for the leaves, which catch up later. Also called the Love Tree. Among lesser known areas of beauty, there's a fabulous carpet of wild garlic developing alongside North Parade. 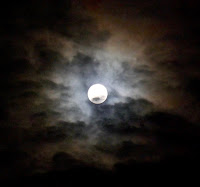 Tuesday night's impressive full moon inspired discussion about lunar nomenclature, since April's moon is called Pink in the Native American listing, which also has a Buck and a Beaver moon, so my preference is the Northern European cycle. This begins in January with Ice Moon and continues  Moon of Wands, Hare Moon, Rain Moon, Blossom Moon, Honey Moon, Thunder Moon, Barley Moon, Harvest Moon, Hunters Moon, Owl Moon, till December's Moon of the Long Night..  Our term 'honeymoon' may have come from the time between late sowing and early harvest being seen as an opportunity for rural workers to celebrate weddings. 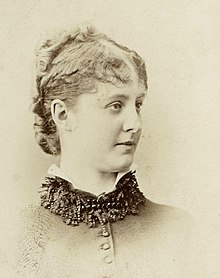 This week's little-known personality is Victorine Meurent, who lived in Paris in the 1860s & 70s, making her living by playing guitar, singing in cafes, and sitting as a model for Manet, Degas, and Alfred Stevens among others.
She has been immortalised in paint with cherries, with a parrot, a croquet mallet, a bouquet, a puppy, and in full regalia as a matador, but her most famous appearance is at a picnic. 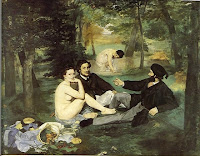 Le Déjeuner sur l'herbe slightly shocked the art world, though not as much as a public picnic without protective masks and gloves would shock us all today, and Manet's compositional intention remains a mystery, especially as he himself called the painting The Bath.  He continued to use Victorine as a model until the early 1870s, when she began taking art classes and they became estranged. Like Elizabeth Siddal who tired of looking gorgeous for Rossetti and took to the palette, Victorine used her latent creative skills to step out of the 'feminine sphere' ideal of her era.

And finally: if you aren't familiar with the billboard art of Robert Montgomery, you might like to take a look at his work here: salutary pieces for thoughtful times. And/or, you can now virtually-visit the works created by Frank Lloyd Wright here - the times might be US zone only so maybe just look at the pictures while playing the appropriate Simon & Garfunkel track.
Posted by Crysse at 4:01 PM