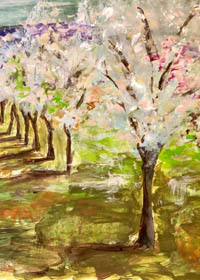 And as sunshine and clear blue skies continue, here's another cultural miscellany to while away these strange days.
Art first, as the delayed Black Swan Young Open 2020 is now live as a virtual exhibition of exhibitors and winners. If there are virtual awards going for arts coordinators coping in times of crisis too, the Black Swan team should scoop them all: this link will show you the top prizes in all three categories (this painting is Indigo Spring by Indigo Cameron Clarke, one of the 8-11 winners) and also take you on complete tours of all the successful entrants' work, escorted by Black Swan Art's Amanda Sheridan.

On to lockdown drama:
Were you one of the 85,000 waiting to watch the inaugural free offer from National Theatre Live at 7pm on Thursday? The final viewing figure for One Man, Two Guvnors was apparently 165,595 - probably mainly lured by the chance to see James Cordon in the role that won him a Tony 'best leading actor' award in 2012. 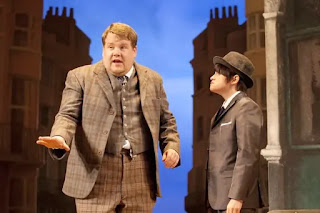 Writer Richard Bean took the idea of a wily servant trying to serve two masters from the 18th century Italian playwright Carlo Goldoni, transposing it to Brighton in the heady days of skiffle and spivs and dolly birds with beehives. Some may find this kind of farce ideal in troubled times, but if you prefer your humour slightly surreal there's Seinfeld and Father Ted on offer free by Channel 4 on demand.   And Cornwall's wonderful Miracle Theatre - if you live in Frome you'll have seen their fabulous small-cast productions on ECOS during the summer festival - is offering a free-view production online from 7pm on the first Monday of each month throughout the coming month. Next Monday (6 April) is "Tin’ a large scale collaboration with English Touring Opera, commissioned by the Cornish Mining World Heritage.

Poetry: Frome's fabulous Liv Torc, performance poet and cornucopia of creative ideas, has made the The Times 'Notebook' column for originating the 'word of the week': haiflu. There's a selection of 50 to inspire you here.  If you forget the 5-7-5 syllable structure of this mini-form where rhyme is irrelevant, here's a helpful reminder from John Cooper Clark:

To write a po-em
with sev-en-teen syll-a-bles
is ver-y diff-ic-
Meanwhile the Poetry Foundation will email you a poem of their choice every day. This is the start of Wednesday's - you may well know it but it's good to revisit Still I Rise by Maya Angelou.
You may write me down in history
With your bitter, twisted lies,
You may trod me in the very dirt
But still, like dust, I'll rise.

Music: Happily, there are already enough free music videos available to last several lockdowns, but if you've been a fan of Sofar you might enjoy some of the international sessions available now for free. No new shows obviously but literally a world of choice: here's some mellow sounds from Dublin last autumn. 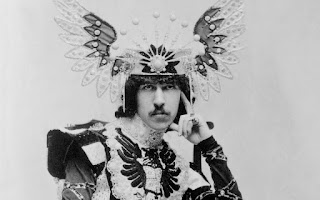 This week's Little Known Character is Henry Paget, 5th Marquis of Anglesey who died in 1905 aged 29, having scandalised society and bankrupted his estate by spending thousands of pounds on jewels, furs, cars, boats, dogs, horses, toys and theatricals on a scale that staggered even the profligate Edwardians.  His passion was to dress up as Queen Eleanor of Aquitaine and perform his sinuous 'butterfly dance' in German music halls; he wandered through London with a poodle dressed in pink ribbons, modified his car so the exhaust smelled of rose perfume, and reportedly 'bought diamonds as an ordinary man buys cigarettes.' Described by one acquaintance as 'an Aubrey Beardsley character come to life', the marquis did marry but the bride left after the honeymoon, although she was with him when he died. His family then set about disposing of every shred of evidence of his excesses, from roof crenellations to the pingpong balls he played with, in the infamous 'Great Anglesey Sale' which lasted 40 days and contained 17,000 lots. Even his 150 seat theatre went.  Do feel free to send suggestions of little known characters: next week will feature anonymous nudes from famous paintings.


Ending this sunny, quiet, week with a view of Frome from the western fields beyond the river. Stay happy, folks. Remember what Bob Dylan said: Everything passes and everything changes, just do what you think you should do... 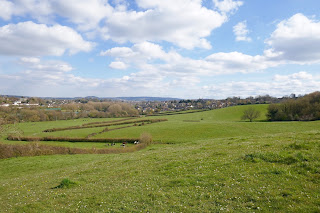