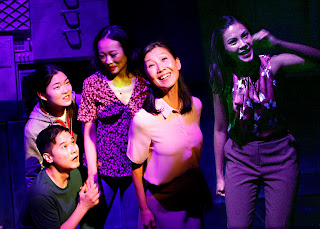 Guk Minsung is a 'wild goose father', a married South Korean who's sent his wife and children to America where he supports them while living alone.* Chuja Seo is a North Korean defector refugee, now making a new life alone while traumatised by the cultural differences she finds over the border.  Goosefather lives on his i-phone, she lives in her dreams: these unreal worlds fill the stage and provide the energy and the passion of Hansol Jung's drama Wild Goose Dreams as internet connections and emoticons shout and dance around him, while she is haunted by penguin soldiers with clipped wings and her interfering abandoned father. 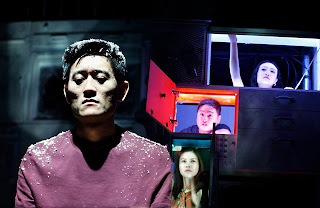 These sequences, hilarious and tragic, are helped by a brilliant set designed by Jean Chan, and enhance a skeleton blind-date romance into an extraordinary story both provocative and informative.  Michael Boyd's direction and a strong cast ensure this drama resonates beyond the entertainment of media parody and even the gravitas of political data - go if you can, it's on till 21 December.
*Not-fun facts: 200,000 fathers are estimated to do this, to save their children from the gruelling South Korean 18-hour day schooling system. And recent studies show more than half of North Korean defectors suffer from PTSD and other psychological disorders. There's still a lot of laughs though... 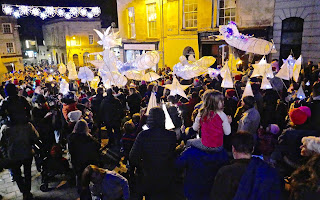 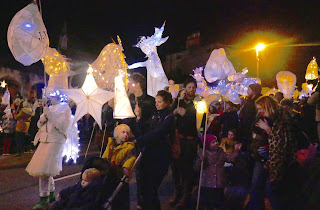 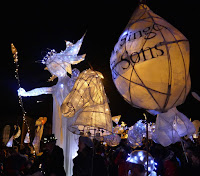 This is the time when towns & cities all over the UK as darkness falls begin to glitter with the strings of lights, and the traditional fir tree (six million of which will go to landfill in January) twinkles through the gloom of every town centre. Frome does this a bit too, modestly as befits its eco-awareness, but the town's real celebratory greeting to the festive season is the awesome lantern parade on Light the Night.

The atmosphere at this town-council sponsored event is indescribable as thousands watch and follow the hundreds of home-made lanterns swaying down the hill, following the parade led by Jamma de Samba's fabulous drummers. There were a smattering of religious-birth relevant songs around the time of the actual switch-on moment, taken by the mayor, following a lively set from our local Rock Choir of karaoke classics like I'm Still Standing... Yeah yeah yeah indeed.

Art exhibitions now, a plethora of them, as local craftsfolk seize the chance to present their work as possible gifts, with Saturday featuring Frome Festive Art Fair, a one day spectacular of printmaking, painting, ceramics, sculpture, illustration and jewellery shared across two splendid venues, Silk Mill and Rook Lane Chapel. Every artist had fabulous work to offer so here's two general views: 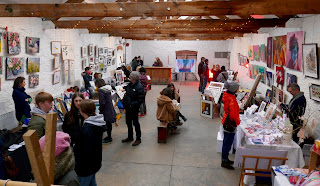 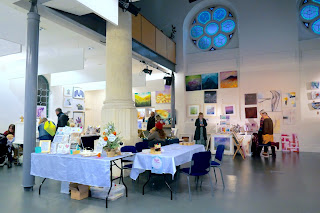 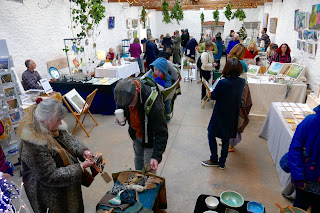 Next day, Silk Mill did a quick turnaround for the studio artists' collective own exhibition: the Silk Mill Collective's Christmas Fair, an even busier event selling classy jewellery, ceramics, designer-clothing, paintings, sculptures, and glassware all created by the 14 artists and designer-makers who work there. 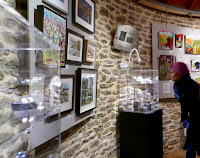 This was held on market day, while in the meantime a Christmas exhibition by artists of the Black Swan Guild has also launched. Small and Mighty includes a fascinating mix of personal themes and studies, and is on at the Round Tower until December 24th.

Turning to music, there's quite a tangle to sort out as both Friday's Light the Night event and Sunday's Independent Market were thick with music, so I'll start with the relative calm of Saturday: Here's Rebel Heroes Bowie tribute band at the Cornerhouse - with apologies to Boot Hill All Stars for missing their gig that day for Shelter at 23 Bath Street.

A time-jump back to Friday night  when, after the lantern parade arrived at the town centre, there was more street theatre to enjoy as popular Frome Street Bandits band took advantage of a fine night to transfer from the Grain Bar stage to the courtyard where there was plenty of room for their massive duelling trombones. 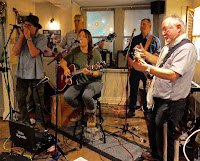 Then a dash to the Artisan, rewarded by an evening session from top-of-leaderboard Bare to the Bones team as Paul Kirtley's assorted medley of creative jammers were joined by Hello Hopeville. Both bands gained big applause and charity donations from punters who even made space in the crowded pub to dance. 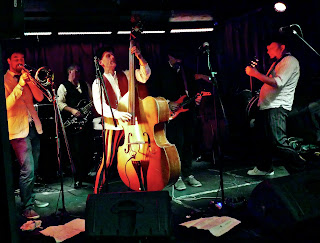 Sunday afternoon saw another charity gig at 23 Bath Street from the Back Wood Redeemers Alternative Nativity, 'an irreverent Sunday Afternoon Knees-Up' welcoming all sinners with comforting classics like Give Him a Good Death and I'll do the Wrong Thing &  I'll do the Right Thing Wrong (and Eddie's sinister Chocolate Jesus for which I can't find a soundcloud link.) 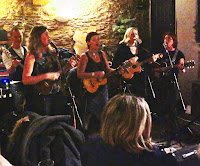 This tasty afternoon irreverence was followed by Back of the Bus at the Griffin: 'post punk pop with attitude' and ukeleles, with a particularly vicious take on Psycho-killer. I love their sinister version of Nice Day For a White Wedding too. 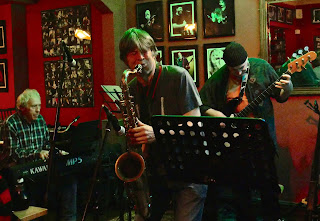 Sunday evening was much calmer, with a pleasant Jazz Jam at the Cornerouse. Among a varied group of performers, here's a rare picture of Simon Sax who organises this event with Nicki Mascall. And still on the theme of Frome's fantastic range of music this week, although sadly no image was possible in the stygian gloom of 23 Bath Street, credit too to the talents of The Brackish plus Rivers of England in a lively fund-raiser gig for Frome Labour party. 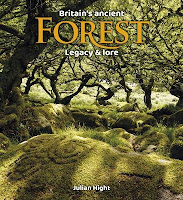 All of which kerfuffle brings us in sparkling style to the frosty final month of this year, with the Frome Independent Market now taking a break until March. Word on the street assured me that this festive-shopping market was fantastically busy and successful, but my personal participation was limited to Hunting Raven Books on Cheap Street, where I sat with Julian (Bugsy) Hight signing & selling books . So I'll close with a top-tip for booky presents: If you've already bought everyone Frome Unzipped, or just because Julian's latest addition to his tree saga is beautifully illustrated as well as massively informative, then Britain's Ancient Forest is a the way to go.
Posted by Crysse at 9:23 PM