Midwinter high spirits in times of sleet and glitter 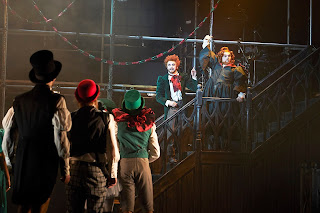 A Christmas Carol at Bristol Old Vic was never going to end with Tiny Tim saying God Bless Us Every One - like L.P. Hartley's past, they do things differently there. Yet despite burlesque overtones and operatic narration, this irresistibly engaging production stays close to the spirit of the storyline, though with the occasional intrusion of foodbanks and shopping trolleys, and even closer to the spirit of Dickens.  All the principle characters of the story are here: embittered Scrooge, his patient nephew, his loyal clerk with a small sick son, the warning ghosts and phantom-memories of loves and losses... but they're all a little bit unexpected. Bob Cratchit is a chubby deaf mute - so, uncoincidentally, is Mrs Fezziwig (Stephen Collins delightful in both roles) - and Tiny Tim and Ebenezer when very young are played by two children extracted for this purpose from the audience. This is particularly entertaining when Scrooge, observing ethnic diversity between himself and the shiny-eyed happy child he used to be, comments 'It's me! I remember the flat-top.' 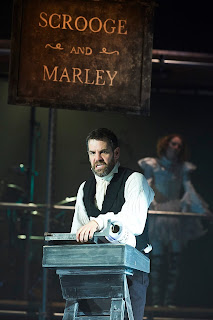 Our anti-hero's flair for impro is especially useful in the final scene, when he begs the audience to tell him how to make amends: on the night I was there, suggestions were focussed around drinks for all at the bar, until 'Come on you lot, this is the immersive bit!' was rewarded with the suggestion of a turkey, and the drama could move to its happy conclusion.
John Hopkins is tremendous in this central role, terrifyingly nasty until the ghosts take him in hand and the poignancy of his memories evokes a moving grief. Tom Morris's adaptation skilfully enhances the parallels with Dicken's own experiences, subtly emphasising how treatment of the poor and weak in Victorian days is emulated in our own society: it's significant that Ebenezer learnt his contempt for 'lower orders' and his desire to amass wealth when he was sent away to school, as so many of our current political leaders have been. 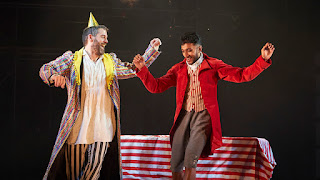 Historical and social relevance is fascinating but this is above all a strong story retold in a fantastically entertaining style, with great musicality, weird effects and scary puppets, funky costumes, lashings of humour and some weepy moments - everything you want from your favourite morality tale in fact. Massive credit to director Lee Lyford, designer Tom Rogers, musical director/composer/lyricist Gwyneth Herbert, and the ten superb actors - enthusiastically recommended for all ages, on till January 12th. (Images Geraint Lewis) 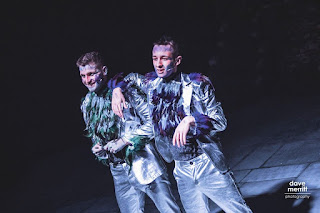 And another 'winter special' opened this week: Cinderella at the Merlin Theatre in Frome, also impressively re-envisaged, and also presented with masses of music and spectacular effects. Claudia Pepler, who writes and directs these shows, goes back to Grimm's tales - and indeed these original authors control the plot in their manifestation as pigeons, thanks to superb balletic comedy duo Dillon Berry and Pete White, who tell us 'We are the brothers, the brothers Grimm, we're story tellers, or disrupters, if you will - we fly from tale to tale...' 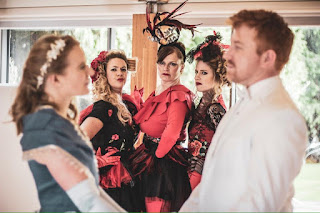 Here's the charming prince (Ben Jenkins) and his adorable Ella (Amy Maughan) watched by her wonderfully dreadful sisters (Tabitha Cox and Abi Holmes), with Victoria May as the stepmother tricked by land-grabbing Dave Merritt. This kind of plot embellishment, as well as Ella's environmental passion, brings the classic tale cleverly up-to-date while losing none of the fairytale quality - in fact Howard Vause's pumpkin-to-coach animation sequence is one of the highlights of a glittering show. This production is up for the Somerset Fellowship of Drama Cinderella Trophy, and so it should be!
(Images: Dave Merritt) 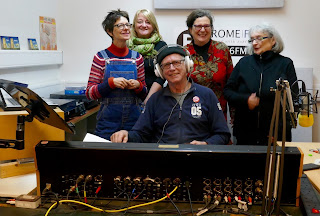 And now for something rather less visual: Writers on Radio, presented by Frome Writers' Collective, is broadcast monthly on Frome FM.  Each programme is a miscellany of information and entertainment on writerly topics, with a dash of music. The upcoming show also includes my short personal tribute to Jill Miller.  Jill will always be remembered for the cancer charity she founded but she was a writer too, and I was invited to share this aspect of her life. Here's the team at the end of the recording: Suzy Howlett, Jules Garvey-Welch, Sian Williams and Lisa Kenwright, with techie PJ - the show goes out Friday Dec 13 and is online here. 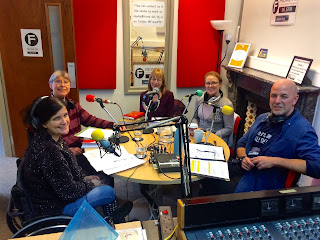 Next day saw me back at the studio for the On Air Book Group, broadcast live and online soon, a convivial session with Sheila Hedges at the helm: Books-as-gifts was our seasonal theme, with an overview from Tina Gaisford-Waller, queen of Hunting Raven Books, and a range of ideas from charity shop browsing to splendid editions, like Britain's Forest Story by Frome's Julian Hight. My other recommendations included the marvellous Etymologicon by Mark Forsyth - rapid-fire witty word-loops connecting origins with torrents of historical anecdote - Frome's bookshop will order you a copy for the logophile in your life!  Here's me with Tina and Pat Taylor talking to hosts Karen Stewart and James Ellis with Sheila Hedges - thanks Terry Stewart for the picture of us all. Our chat is online now here - number 37 (06/12/19) 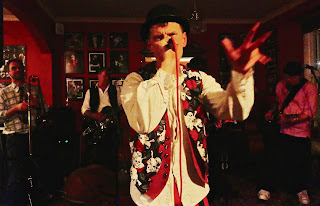 Music report this week is thinner than usual, due to so much else going on: The Back Wood Redeemers at theCornerhouse on Saturday gave their usual stonking selection of dark specialities like Give Them A Good Death in a performance even darker than usual as the light bulb had been removed. So here's a snatched shot of fantastic Eddie Young abandoning his double bass and invading the dance floor - I forget what he was singing but it was awesome... 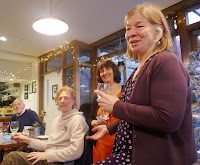 And a look back now at two ongoing projects in Frome both celebrating successful conclusion: Black Swan's boundary-breaking Listen - a Summer of Sound Art successfully signed off its final programme in a wide-ranging list of events and although contact with the town council and Frome FM to maintain new initiatives will continue, a wrap party seemed appropriate. So Sunday afternoon saw a very pleasant cava and cake party at Black Swan cafe, with a final word from organisers Mel Day and Helen Ottaway, pictured here with sound-wizard Michael Ormiston.

Finally for this week: way back in summer sunshine, a group of Vicki Burke's Fromie friends assembled with her in Rodden Meadow to dance around the big oak as part of Vicki Burke's Magic Money Tree - a campaign video for the project PIPPA (People in Positive Politics Association) filmed by Howard Vause. The preview was on Sunday at Frome's Granary, and as multi-talented Vicki is also a band member in Seize the Day, we had a rebel-rousing introduction to the showing too.
I'll leave you now to the contemplation of your hopes and trepidations for the week ahead...