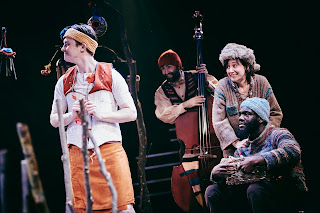 I don’t go so often to Tobacco Factory Theatre since the whole area became a permit-parking-only zone, and the promotion image for this version of Snow White didn’t entice me, but luckily a friend tipped me off I was missing a treat so on a dark and icy afternoon I plodded the 40 minute trek from Temple Meads Station and was opulently rewarded. This is a fabulous production - not, though there is fair bit of audience interaction, a pantomime but a great classic story, spiced gently and entertainingly with environmental and social values. 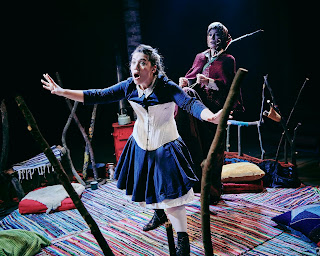 New International Encounter, here in collaboration with Cambridge Junction as well as Tobacco Factory Theatres, has a reputation for superb, accessible, story-telling - inventive, succinct, and with lively musicality. The four musicians are on stage throughout: they carry the narrative thread, create the spirit of the magic mirror, and enact the seven dwarves with (mis)calculating insistence about their number. This happy band of social misfits have all left stressful jobs to live an alternative life-style, growing seven kinds of onions and serving vegan stew in a non-gender way. They do their incompetent best to take care of Snow White, but the wiles of the wicked Queen initially wobbles the community into frightened calls for "locks, keys, fence, wall - 42 feet high, with barbed wire! and a buzzer… We’ve got to take back control!" Luckily they quickly decide,  No - this is not us. Love is what matters - an open heart.  But clear personal boundaries! 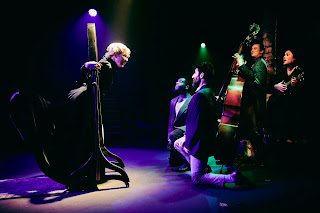 All this is fun but doesn't distract from the Grimm focus in the tale on the wicked queen and her terrible plans.  Stefanie Mueller in this role is absolutely fantastic, swinging from near-recognisable family stuff at the start - the exasperation over teenage defiant fibs - to demonic obsession with her appearance and evil plots to kill her step-daughter (I got the blame for that, actually - one of the dubious delights of a front seat in an interactive show!) But even she is allowed a small, thought-provoking, voice when she laments, I was told I had to be 'the fairest,' nobody told me that just 'fair' would be enough. Multi-talented Ms Mueller also designed the set and costumes. This is genuinely an all-age show and it's on till 19th January - a great antidote for dark days ahead. Images Mark Dawson. 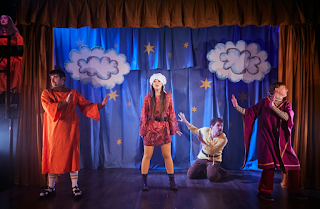 Meanwhile 700 years ago in the real world no-one was having a good time in a society dominated by the draconian rules of sex-starved, sex-obsessed church officials. Based (surprisingly closely, though the dummy left for burial probably wasn't a mop&bucket) on the true story of a nun on the run, Breach theatre created Joan of Leeds - a lusty end-of-year romp with mirth, bawdiness and song, in keeping with the Yorkshire Medieval Players they claim to be, which sounded like a fun idea and worth a trip to New Diorama Theatre although central London isn't my patch for reviews. 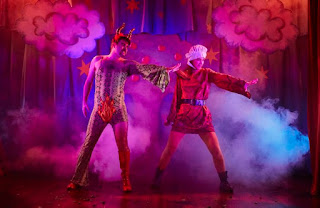 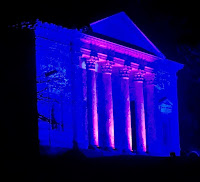 Another evening prowl in search of festive illumination, this time to Stourhead, didn't reward nearly as well as Longleat: the concept of blasting heavy colour on specific buildings and trees benefitted neither, and the elegant vista of the lake on arrival was obliterated by oscillating vividly-coloured bobbles. You don't have to be a cantankerous dendrophile like me to recognise that Stourhead is an elegant example its era's respect for the grandeurs of antiquity and the concept of beauty in nature, and fierce floodlights detract rather than embellish.

A blast of music now: 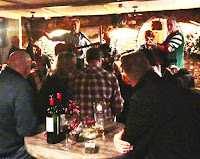 The 'Last Bones Gig of the Year' was at the The George at Nunney,  courtesy of manager Tania, and with the massed instruments & voices of the entire village, it seemed, especially for the finale version of Fairy Tale of New York which Bones leader Paul Kirtley reckons as good the original...  certainly more celebratory. I also liked the the guitar solos on Come on Baby Light My Fire, but it was all enjoyable - big appreciation to both Frome and Nunney gangs for a great gig, to the customers who contributed to Paul's charity bucket, and of course to the man of every Bones match, Paul himself. The sound was fantastic but historic buildings don't cope well with biblical-scale downpours so my images caught the convivial atmosphere rather than the event. 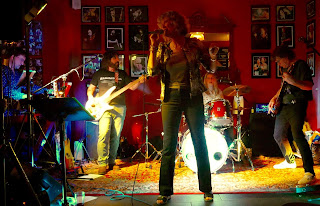 Back in Frome, we've had a goldrush of brilliant bands: amazing Purple Fish bringing classic rock to the Cornerhouse on Saturday, followed next night by the utterly awesome Pete Gage band with Craig Crofton on saxophone.. two sensational events from passionate professional performers - Frome pubs must lead the world for treating their customers to great gigs like these. 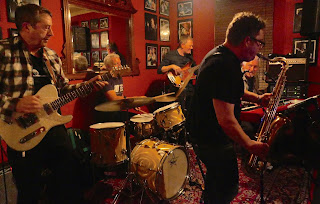 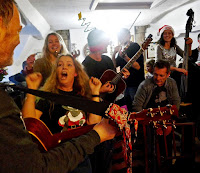 The Three Swans took over to fill the gap on Sunday afternoon with an all-afternoon session from the massed forces of several local bands as traditional folk musicians from various traditions joined up with singers and players in a variety of styles from swampy funk to 80's pop. This was a real party event, with all ages crammed into the upstairs room amid the rococo furniture and startlingly retro wall adornments.

Happy celebrations whatever you choose to do - see you after the flack has settled on a new year. 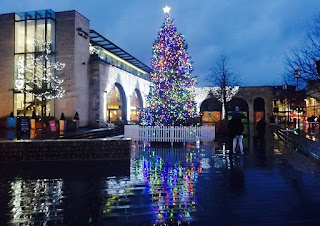 Crysse - the great thing about your scripts is they centre the attention of us readers on the event/location and whet the appetite. Consequently I wished I'd done the Baccy Factory, wasn't fussed about missing the lights show at the lake and will never forget hearing about genital gatherers. Merry Xmas from the drunk tank and thank you so much for supporting Bare To The Bones so well.. STRENGTH AND HONOUR

Crysse - the great thing about your scripts is they centre the attention of us readers on the event/location and whet the appetite. Consequently I wished I'd done the Baccy Factory, wasn't fussed about missing the light show at the lake and will never forget hearing about genital gatherers. Merry Xmas