Seasonal spangly candly celebration abounds now in Frome but the weather in our neck of the woods doesn't seem to have yet got the hang of winter. Mild days enlivened by rainfall in literal floods alternate with dazzling sunshine and blue skies enlivened by birdsong - possibly from birds that should be halfway to Africa by now.  Maybe they too don't want to leave Europe. 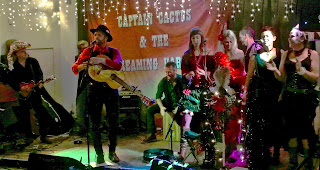 On, quickly, then to arts news beginning this week with live music. Captain Cactus and the Screaming Harlots on Wednesday's Roots Session at the Grain Bar gave a fantastic performance in a party atmosphere that delighted the crowd who squeezed in for the penultimate show of the year. As well as great musical performances this band are always a visual delight with lots of drama - this time enhancing their instrumental accompaniment with sousaphone and kazoos - eager audience participation for those - with a plea from 1982 to Stop The Cavalry

(Patrick you get 3 stars for noting my title gaffe!)
Thursday evening the Granary had a great night of garage & punk bands - here's Los Grebos - 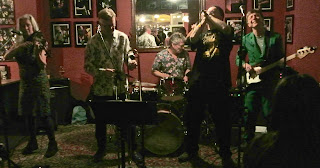 and Saturday the splendidly eccentric Blue Midnight made a welcome return to the Cornerhouse. 'Unlike anything you've ever heard' as trombonist Nick Waterhouse modestly describes a band that melds reggae with folk, adding violin, bass, harmonica, drum & vocals, playing songs called things like His moustache is part of the family but he isn't and Can't pay the rent! No image for Sunday's Frome Jazz Club at the Cornerhouse but an excellent session of Nordic works from Keith Harrison-Broninski's trio with trumpeter Gary Alesbrook. I especially liked Witchi-tai-to, based on the Jan Garbarek version, Keith tells me (if I've got that right) and Dodge the Dodo.

Frome FM Radio station is thinking about books for Christmas, which is very nice for me: Writers on Radio on Tuesday invited me to talk about Frome Unzipped and to read an extract in a programme extremely professionally led by Sara Scholefield which included also some excellent tips for writers from Suzy Howlett and Lisa Kenwright (link here). On Wednesday the Book Group invited me to join them to discuss gifts for avid readers and also the counter-phenomenon of tsundoku which probably happens everywhere but only the Japanese have sensibly identified the common habit of collecting new books and not getting round to reading them.. link to that on the Book Group page as 7th December's show. 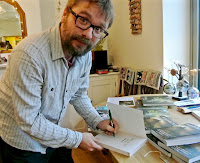 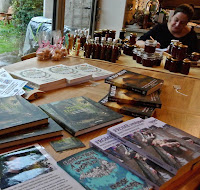 Frome Unzipped also enjoyed a place on the bookstall of Nunney Road Christmas Bazaar, warmly hosted by Elanor Steel Ceramics and crammed with crafts, cakes, and mulled wine, where I was delighted to meet Dave Hamilton, who writes widely on countryside topics, and to agree to his suggested book-swap.

Meanwhile..... plans for a Nevertheless production in Frome Arts Festival 2019 are already showing their tiny fecund tips... we have the venue booked, the actors, the scripts... fans of pub theatre, keep an eye on our page in the coming weeks!