Poodles, ravens, and quite a lot of music.. 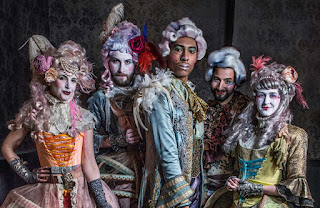 The Scarlet Pimpernel at the egg at Theatre Royal Bath was created in association with Pins & Needles Productions, and together they've created a version which will amuse adults with fragmentary historical recall, baffle children in 6+ range, and totally delight everyone. (Top tip to enthrall a young audience: start the action with haggard crones in the auditorium offering severed heads before the show starts - the sight of 150 small children popping and squeaking in their seats is quite something...) The multi-talented five on stage seemed to be enjoying everything too, especially the fights, the flights, the dances, the disguises, the costumes (think punky Marie Antoinette), the corny gags, the brilliant music (composed & directed by Jack Drewry) and the inventive props - there's an impressive guillotine and even a life-size canon, though it fires only poodles... if this all sounds chaotic, there is a storyline holding together this tale of mistaken identities, severed heads, revolution and resistance.  Baroness Orczy's legendary English lord - who took it upon himself to rescue French aristocrats - in this version becomes the Scarlet Pimple, with Dominic Allen's splendidly vicious Chauvelin in pursuit: there is a short appearance by Robespierre but most of the story is lively invention. So if you're a history teacher and when you ask the class what caused the French Revolution and they all shout 'Poodles!', you can blame Christopher William Hill who wrote this entertaining adaptation. 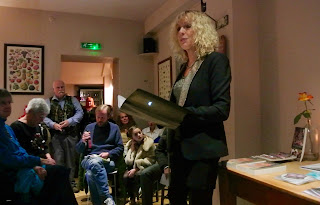 Frome Festive Poetry Cafe on Monday was a real delight. Guest Rosie Jackson, who spent the summer collecting a positive garland of prizes from Poetry Festivals around the southwest, gave two impressive readings around themes of art, soul, and light in all its forms. The Open Mic section was particularly entertaining this time, with a huge range of styles from poignant to hilarious.  That splendid emporium Hunting Raven Books had donated several books as christmas gifts, and a full-house audience good-naturedly accepted my 'scientifically selected' allocation of these for poignancy (Louis Payne), scandalousness (Claire Coleman), reference to fish depletion (Mike Grenville), debut reader (Diane Preston), use of the word 'red' (Sara Morris), and intriguing fragments (Kieron Bacon). 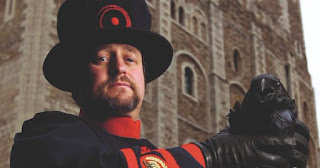 This image is not one of mine, it's from the facebook page of the Ravenmaster, an amazing character who lives and works in the Tower of London, tending to the legendary ravens. He is completely besotted with these creatures, and insists they have 'soul' as well as intelligence and - often - a wilful sense of humour, which he demonstrated to a large, intrigued, audience at his slide-illustrated talk in the Bennett Centre on Friday evening. The tradition of maintaining the ravens' presence is fuelled by superstition but to Christopher Skaife's credit, he discontinued the habit of clipping the birds' wings - he says he wants them to stay by choice, not because they can't fly.  His fascinating talk and book-signing was the enterprising idea of Hunting Raven Books who hosted with wine and mince pies.

Catherine Hill had a pop-up Christmas market planned for Saturday but Storm Deidre was out & about in Frome so I wasn't, so sadly I can offer no report, and will move swiftly on to music: 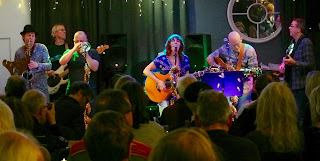 The Grain Bar Christmas Special showcased the amazing Critters, the band that moves from folk to dub & reggae to classic pop, with the wonderful voices of Nicky Mascall and velvet-throated guitarist Steve Loudon. Add great fiddle, bass guitar, drumming, and the superhuman skill of guitarist Paul Hartshorn, who seems to have ten fingers on each hand. Their party atmosphere was contagious in the audience too... 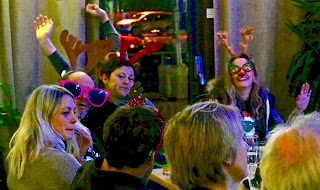 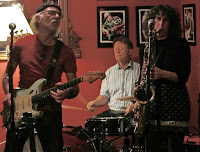 Up to the Cornerhouse now, for three nights of sheer class: Flash Harry on Friday got us dancing with their energetic & extraordinary folk/rock/jazz/ fusion - their Irish Rover made the Pogues seem tame,
then 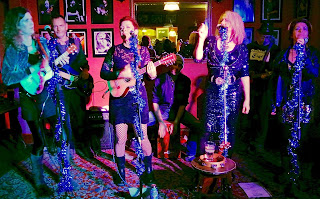 Saturday night had more simultaneous band options than Glastonbury, with punk at Lamb & Fountain, rock in the Sun, the street band at the Three Swans, and wonderful Back of the Bus seen here heading up a party in the Cornerhouse... luckily the storm had passed by then. 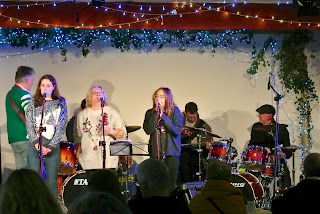 Sunday was Nunney Acoustic Cafe's festive party, an extended edition involving no less than 17 spots from a wide range of great performers - here's the 'house band' spot, and superb Emma Harris at the evening's jazz cafe at the Cornerhouse with Graham Dent's trio.


Fizzing footnote for this week: Skyros Holistic Holidays has confirmed my session as 28th July to 10th August, in Atsitsa Bay.  Other activities offered include yoga, windsurfing, kayaking, painting, singing - and of course swimming, walking, dancing, and generally having a fantastic, mind-blowing, life-affirming, time.... you can book, should you feel so inclined, here! 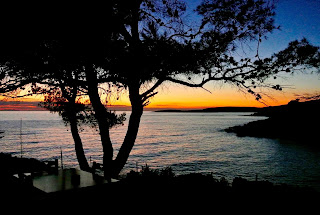