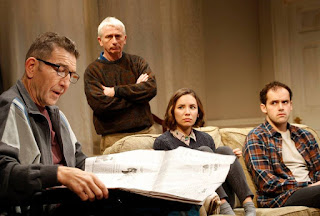 The new play at Ustinov Studio Theatre in Bath, The Open House by Will Eno, is a suitable tale for the season: a family reunion that absolutely no-one is enjoying - in fact the dog has outright legged it. Prepare for bullying aggression from father (Greg Hicks), passive-aggression from mother (Teresa Banham),  mute resentment from both grudge-bearing children (Ralph Davis & Lindsey Campbell), and an atmosphere of unmitigated wretchedness that even dark humour wouldn't sustain for 90 minutes... and happily it doesn't have to, though I can't tell you why not (or show in imagery) because it's so unexpected, and clever, and satisfying, you have to go & see for yourself. Please do, it's on till 23 December.  Michael Boyd directs, the costumes (Madeleine Girling) and set (Tom Piper) are both great ~ again, image-hints would spoil.  Forget story arc, or inciting incident, or any of the rules of drama you learnt, simply sit back and enjoy. 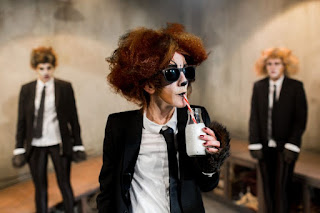 Wardrobe Theatre in Bristol is also offering alternative entertainment for the festive season, and after Rocky: A Horror Show (which was great) and Goldilock, Stock, and Three Smoking Bears (which was fantastic), I had high hopes of Reservoir Mogs, a girly re-envisaging of the macho-thug genre plus massacre of Lloyd-Webber cuteness. The audience clearly had similar expectations: there's a kind of party atmosphere in the non-ticketed seating ~ it's tiered like a proper theatre, but you're stamped to go in like a festival ~ and response was enthusiastic. For me the first half was a bit too much like St Trinians girls, immaculately costumed & face-painted, being wickedly naughty to entertain their teachers (or perhaps vice versa) but after the interval I was converted, when all pretence of narrative thread was abandoned in favour of audience abuse and an amazing multiple death scene... well cats do have nine lives so it takes some time to demolish them all... No apologies for spoilers, they can't stop you enjoying a show at this great little theatre. 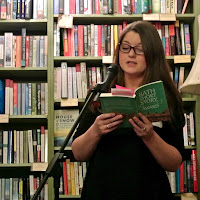 Moving to things more sensible, Bath Short Story Award, a prestigious international writing contest for short fiction, put on their usual splendid event in Mr B's, a bookshop so compellingly wonderful it's hard to leave with just the book you came for: in this case the 2017 Winners Anthology. Short readings from winners and others included in this impressive collection gave a taster of the high standard from which literary agent Euan Thorneycroft of A M Heath, had to pick! Congratulations to organisers Jude Higgins, Anna Schlesinger & Jane Riekemann ~ and good to meet up with friends from Bath literary scene including Debby Holt. 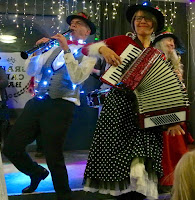 Meanwhile Frome is gearing up for all things festive, which means many crafty-arty events with mulled wine and stollen, and even more music than usual. Here's Frome Street Bandits giving a lively performance on Friday after the big event of the week: on a clear night with a bright moon ~ and after removal of the screens around the market cross renovations ~ the Tree-Lights-Switch-On! This year the honour went to 10-year-old Ted Lewis-Clark who designed the santa-stamp for the Post Office (our own main box has been painted blue and starry in his honour). All fun and much enjoyed by the massive crowd, as was the singing and the stalls, but the real delight of the night was the lantern procession: hundreds of lanterns all made by their carriers, led by drumming bands from each end of the town to create an unforgettably magical scene ~ huge credit to Mel Day and Aliss Vaas for the long hours of many workshops, thanks to the town council for sponsoring, and total appreciation to the people of Frome and around, for joining in and making this amazing night happen. 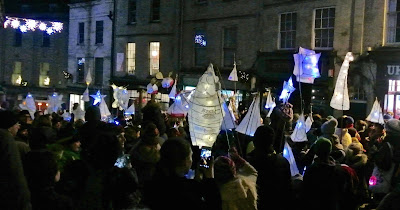