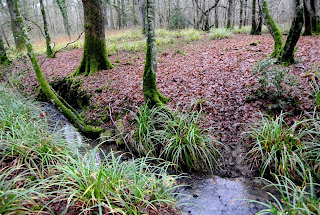 Dendrophilia literally means simply 'love of trees' but like arbophilia it's become seen as  a sort of sap-induced sexual arousal. A passion for woodland walking is a simpler sensuality for most of us: it's about smells of moss & lichen, sound of birdsong and crunchy leaves, the green & auburn tones of midwinter, the tranquility, and our deep instinctive awe at the timeless majesty of these tall life forms we call trees. Perhaps it's more like animism ~ our ancient understanding of the super-natural powers of everything living on earth. 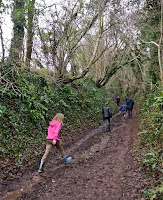 This post is mostly about binge-walking.  At winter solstice my walk from Frome into Wiltshire with David took us along the Sustrans path through Longleat woods, always beautiful. Here's one of the fairy-tale creatures inhabiting the parkland over the festive season. There are owls, too, though sadly in cages.

Next walk was with my family and in the opposite direction: we took a field route around Radford Mill, including the ancient holloway named 'Jenny's Path' after the little donkey that hauled coal between the mine and the canal in the late 18th Century. And then on Boxing Day, my favourite close-to-home walk, along the field edge just south of Frome to Roddenberry hill fort, flanked with beeches, glorious in every season. 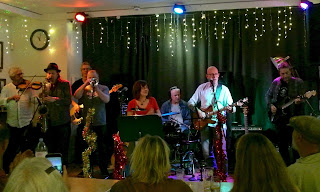 This has been a good week for music too, with several open mics, Pete Gage Band at the Cornerhouse (his new CD is amazing) and a big tribute event for Griff Daniels, one year gone and still much missed, at the Roots Session in the Grain Bar. Nikki Mascall and Steve Loudoun led an epic musical gathering including Simon Sax, Mike Peake on trumpet, and Paul Hartshorn guitar.

No theatre to review week but I'm chuffed that the new issue of Plays International has a image of The Tin Man at Bristol Old Vic on the front cover, as featured in my column on productions in the southwest within. Still on a theatrical theme, I'll end with 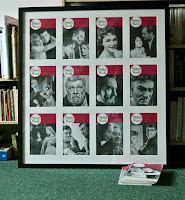 an odd tale which began in July when I stumbled upon ~ that's the term for an unexpected and fortuitous discovery I believe, though actually they were on a shelf ~ a pile of Theatre World magazines from 1962. This monthly publication is long defunct but it was once prestigious, and my father was their reviewer for various festivals and many London shows. (His style was caustic rather than effusive, in case you were wondering where I get it from.) Anyway, he sometimes took me along, and the May '62 issue includes one I remember vividly: the first English production of The Caucasian Chalk Circle, at the Aldwich.  I was overjoyed to find these back in the summer, and now I'm overjoyed all over again, as my wonderful family have framed the entire collection of covers ~ or rather, a hi-res image of each, no magazines were harmed in making of this gift. Isn't it great? All I have to do now is find somewhere to hang it...
Posted by Crysse at 5:05 PM