A couple of theatrical re-envisagings for you this week: First, Shakespeare's sweet-bitter comedy Much Ado About Nothing from Rondo Theatre Company in Bath. Set in 1590s Sicily this story of soldiers returning from war to reconnect with the women missing them (and becoming more feisty, too) seemed to directors Lisa Thrower and Andrew Fletcher to have fascinating parallels to the end of World War II. 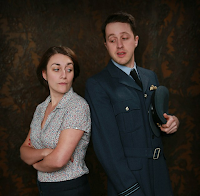 This too was a time of conspicuous celebration, with undercurrents of unease as roles were clearly changing. Beatrice especially has a confidence in her opinions which chimes with the independence of those UK women who'd coped with amazing fortitude for six years, and now found they were expected to step back into subservience. The directors' theory works ~ impressively well in fact. On an unelaborate set with lots of union-jack bunting, the bard's script transfers with minimal tweaks to the volatile emotionalism of 1945, making it actually easier to forgive stupid Claudio and believe in everyone's gullibility. A terrific cast helps: Naomi Miller and Chris Constantine as Beatrice & Benedict were simply superb, bringing absolute authenticity to every moment, especially in the scene after Hero's collapse which still makes me shudder to recall. Among their elders, Jeremy Fowlds' Leonato, his friend Don Pedro (Matt Nation) and wicked Don John (Richard Chivers) were all excellent. I laughed, I cried, what else do you want from a comedy on a cold night? Big congratulations once again, Rondo Theatre.

Over to Merlin Theatre now, where Frome Drama Club chose a ready-made revival: Richard Bean's award-winning One Man Two Guvnors is a re-envisaging of The Servant of Two Masters, a commedia dell'arte piece by Carlo Goldoni written in 1746. It's the same central thread, as summarised in the title, but the 1963 version is set in the seedy side of Brighton, and the immensely successful National Theatre production, which transferred to Broadway, featured not only a TV superstar but a skiffle band live on stage.

Calum Grant directs, with Andrew Morrison as James Corden ~ sorry, as Francis Henshall ~ who has to carry much of the comedy, including organised impro and binge-eating. There's nice contrast from Tracey Ashford and Giles de Rivaz as Rachel and Stanley, especially in their tender reunion, and laugh-of-the-night award goes to Laurie Parnell's Charlie for four words, perfectly pitched: So what's your point? An excellent review from Fine Times Recorder here gives more detail of this exuberant production: congratulations to all involved - and my personal special appreciation to Aaron Hooper's skittish geriatric waiter and his wayward wig. 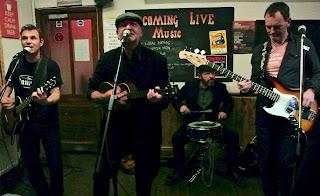 As the misnomered 12th month creeps closer, Frome is already getting jiggy with crafty markets & multi-clash jollities... my Saturday night scamper round town concluded this week at the Sun Inn where the Raggedy Men showed why they're shooting to supernova status ~ especially when supported by a lively uke band and rapper XjX 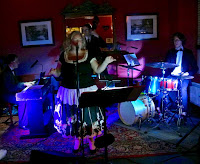 Another mini time-trek on Sunday as Jazz at the Cornerhouse this week featured the sultry songs of Ella Fitzgerald, born a hundred years ago, recreated by the smouldering voice of Frome's Emma Harris, with the John Law trio ~ Billy Weir drums & this time Adrian Smith on bass.

To end this post: my appreciation to Ciara Nolan, for including me in her chronicle of Humans of Frome ~ big privilege to be interviewed for this, and a pleasure too as Ciara being from Dublin can relate to my Irish experiences...  Published in Frome Times this week.

And another, 'finally' moment: As a TV viewer generally only when the moon is blue, I'm loving Howards End on BBC on Sunday nights. EM Forster is one of my favourite novelists: he uncompromisingly nails Englishness in all its foibles & follies, and this tale of upper-class arrogance also reveals the inherent weakness of their 'liberal' middle-class challengers, and it's just brilliant. "I don't intend to correct him, or to reform him - only connect," says avant-garde Margaret with confident aplomb. A good meme but a difficult aim, as history shows us still. Great story-telling and great acting too.
Posted by Crysse at 12:49 AM

Email ThisBlogThis!Share to TwitterShare to FacebookShare to Pinterest
Labels: Howards End, Humans of Frome, Jazz at the Cornerhouse, Merlin, Much Ado About Nothing, One Man Two Guvnors, Rondo, The Raggedy Men