History decides winners... you may not always agree 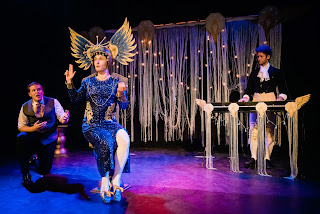 A visit to the Wardrobe Theatre is always a delight: proper pub theatre in the heart of Bristol, only a short walk from the station via the new Avon footbridge, and more importantly every show I've seen there has been fantastic. How to Win Against History didn't break that record.

Based on the true story of Henry Paget, 5th Marquis of Anglesey, this musical is fascinatingly entertaining not only because the three performers have masses of talent & charm but because Seiriol Davies's witty, absurd, script is based on intense research: this is a character study of weirdness uncontrolled by the usual social limits of access to funding. Henry's status allowed him extraordinary excesses. To quote the annotated script that I couldn't resist buying: 'Born to inherit the empire, instead he burned brightly, briefly, and transvestitely through his family's vast wealth, charging round Europe dressed as Queen Eleanor of Aquitaine or sometimes a butterfly, in a car with rose-scented exhaust fumes...'  Henry died in 1905 aged only thirty, and his family erased every trace they could of his existence. The Evening Express headed their obituary 'A Wasted Life', and wrote reproachfully of the man who became bankrupt on £100,000 a year and 'bought diamonds as an ordinary man buys cigarettes'.  Social familiarity with psychiatric definitions was limited at that time, but envy of wealth wasn't. These days, when abuse of personal power is increasingly under scrutiny, the colourful exploits and foibles of this gentle, generous, man seem almost innocent. How to Win Against History is a co-production with Tobacco Factory Theatres. Image: Mihaela Bodiovic 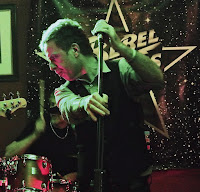 A quick blast of music now: Rebel Heroes at the Cornerhouse, best Bowie tribute band I've yet heard...  and The Raggedy Men on  the busking stage dazzling a large crowd with their 70s retro-punk at the Independent Market last Sunday. 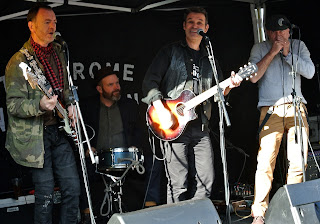 Stallholders and strollers enjoyed a wintry sun for this ~ I  popped into the Magpie market hall too, to check in with Frome Writers Collective and to take a look at Matt Straker's art in the Grain Bar.   And now the glitter-arti opening at Black Swan Arts is over, there's an opportunity for a quiet look at the exhibition of winners from an Open Arts contest that attracted over 900 entries.

Viewer responses to the winning choices have been mixed: some find the pieces inscrutable and the artists' notes obfuscating, but then as Picasso said art should not aim to please. It all made for an interesting writing workshop on Monday, impressively led by Louise Green who suggested subterfuge as an overall theme: the artists' meanings concealed, as poets also often do. There's a link to our writerly responses here, and as contrast to the elusiveness of those ~ mainly pale-toned ~ exhibits, here's Matt's vigorous portrait of Dave Grohl. Exhibition on till end November.

Frome Writers Collective social evening at the Three Swans this month featured readings from the nine 'writers in residence' in shops and cafes during the festival. To suit the festival theme, the writers' trigger was a Jane Austen line: passionate Darcy's plea to Lizzie "Surely, you must know it was all for you." Responses ranged from humorous to murderous, poignant to absurd. Writer Tim Bates was chosen as this year's winner ~ fittingly perhaps, as it was his original idea for a one-day "sweatshop" that we pinched off Bruton Festival of Arts and brought to Frome...

I'm not familiar with Günter Grass's picaresque tale of the Nazi regime through the eyes of a perpetual child, but 'the team that brought you Dead Dog in a Suitcase' was enough to entice me to Bristol Old Vic to see The Tin Drum. As always with Kneehigh, the on-stage musicality is fantastic, visuals amazing with great use of shadows and symbols,  and a terrific ensemble performance team but this time though there's the usual verve, the story-telling feels weak. The first act is mostly personal back-story and only after the interval does a real sense of allegory develop. But Oskar as a puppet (created by Lyndie Wright) is superb, with an expression both wise and naive: despite his drum he's not an initiator and his observation seems more like the incomprehension of the little man than the deaf-dumb-blind secret power of a Tommy; neither the Messiah nor a very naughty boy, perhaps only a delusion of innocence. 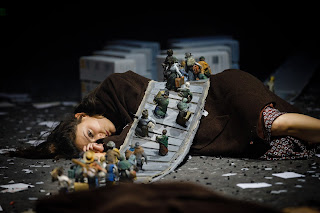 And there's memorable moments: one is when nice kind Alfred arrives home sporting a red armband, innocently excited by the new group forming to empower the lives of folk like them… and another is the trail of tiny refugees across bodies on the stage as the cast sing sadly. The end will either comfort or disappoint you.
Artistic Director Mike Shepherd's company is legendary, and for this production he has Ali Roberts (Tobacco Factory's loss) as Executive Producer as well as Carl Dead-Dog Grose as writer, and Charles Hazlewood composing and ~ well, it's Kneehigh, 'one of our liveliest national treasures' as The Times has sententiously observed, so book before the company heads on off on tour.  On till November 18th. Images Steve Tanner 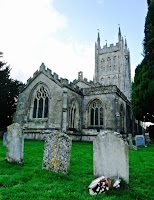 Back to the present now, and the regular retelling of WWI history. Siegfried Sassoon is buried near Frome in Mells churchyard, and his grave always has flowers on November 11th. Sassoon like Wilfred Owen was unequivocal in his opposition to the conflict:
"You smug-faced crowds with kindling eye
Who cheer when soldier lads march by,
Sneak home and pray you'll never know
The hell where youth and laughter go."

Meanwhile in town the Cheese & Grain was enjoying a day of electric dreams, showing off a range of vehicles including the Mark 1 Tesla Roadster, Renault Zoe, & various bikes. Frome Car Club has gone electric so the Zoe is available to hire, but the Tesla is more photogenic. David Bowie's movie Labyrinth was shown in the afternoon, powered by Electric Pedals.

A frivolous footnote to conclude this melange of past & future:

when you lick your first-class stamp to send those belated reciprocal festive greetings, give a thought to the cheery santa steering through a sky Van Gogh would have appreciated: this image, picked from over 9,000 entries, is by a young Frome artist: well done Ted Lewis-Clark! May all your moons be golden.
Posted by Crysse at 5:52 PM