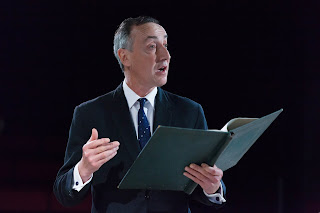 If you enjoy a bit of meta-theatrical in your drama  ~ and I do ~ you should definitely go along to the Tobacco Factory before the month is over to see Living Quarters, co-produced by the company with SATTF and directed by Andrew Hilton.  Writer Brian Friel believed script was sacrosanct and 'a good director hones into the core of the play and becomes self effacing in the process’: this story is controlled by such a director (Chris Bianchi) who allows no deviation from his ledger as the Butler family recall the tragic ending to a night of triumph. Attempts by the anxious cast to interrupt, and appeals to be shown in a better light, are disallowed, as is one character's attempt at a walk-on part (Eoin Slattery, all too quickly walk-off). 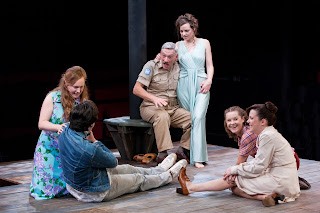 Written over 40 years ago, the central story is timeless: an older man with a much younger wife left alone and bored.  There’s the shadow of the domineering dead first wife too, and more than a whiff of Chekhovian ennui evident in the Donegal homestead, as well as quite a bit of Dostoevskian unique unhappiness. The structure works against overall naturalism so it's up to individual cameos to engross us, and there are several outstandingly moving moments. With a performance in the round, courtesy (and probably pricing obligations) necessitate quite a bit of rotation in posture and placing which can work against the development of emotional intensity and the lighting didn’t help. But the cast is immense ~ especially the soldier (Simon Armstrong) and his two younger daughters (Hayley Doherty and Martha Seignior), in a family tale which for all its moments of empathy fails to fully connect. Images: Camilla Adams 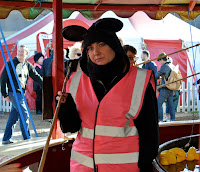 And now for something completely different: the incredible immersive theatrical experience of Dismaland, which I finally achieved on Monday after a mere 3 hours in the queue ~ which is where the dystopian experience properly begins. Airport-style barriers with unnecessarily-repeated loops to ensure extended sight of the lucky online-ticket buyers streaming past & dividing the haves from the have-nots inevitably evoke thoughts of other queues across Europe... and when you arrive with relief there's so much around to entertain, amuse, and distract that you almost forget about the run-down environment, puddles of rain, and angry graffiti ~ in fact these become part of the entertainment. 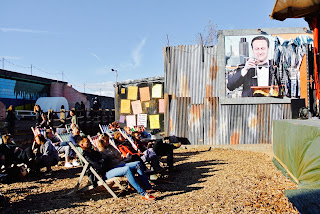 You can queue again to see gratuitous violence, you can sit in squalor and watch a film of a teddy-bear undergoing heart surgery (a perfect mix of macabre and sentimental) or a traditional wife-abusing Punch&Judy show, you can pay to fail at fairground games, you can sit in a bar (the only places where staff are jolly) or look round the Gallery at disturbing imagery, and you can take a selfie in the place provided, where nothing is happening but you still smile. And there's more, much much more, but you get the gist. Over all of this presides the image of our prime minister with a glass of champagne. Banksy is a genius.