It's all over now, California blue...a whistle-stop tour of my last week 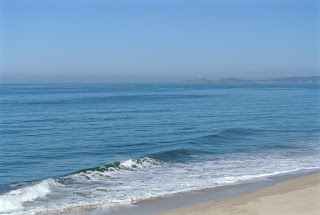 People around here are very friendly. I'd arrived back in El Granada after a long walk along the beach on a glorious hot day, sky unflecked blazing cerulean for about a million miles, and outside the General Stores an old guy started talking to me about the pumpkin-flavour ice-cream I was licking ("Should be more orange" - "It's lovely, it's subtle," - "That's us, stateside - subtle. Subtle and dense,") and he told me how this place had began as a railroad station with no houses here at all.When I got back I asked Mo, and from him and from the plaque at the end of Portola Avenue, I learned the early history of El Granada. The whistle of the first Ocean Shore Railroad passenger train from San Francisco echoed off nearly hills on 21 June 1908. On board were five hundred SanFranciscans, good-time-loving people... and to cut the story short, they were all lured there to consider buying lots in this amazing new development. But sadly, when the last whistle blew just twelve years later, only a few homes had been bought on Daniel Burnham’s magnificent boulevards. Ocean Shore Railroad was plagued by landslides along the ocean bluffs and succumbed to the encroaching roads, but left its rugged mark along the San Mateo county coast.
So there's a bit of history to go with all the geography.

For my last three days here the solid blue sky disappeared and the coastline disappeared, though the beach happily was still fabulous for walking -  in fact I made my longest one-way journey ~ from Poplar to Pillar Point, about 7 miles ~  in dense sea mist. I've seen seals, dolphins, and whales, and masses of seabirds: little sanderlings, elegant marbled godwits (they look like curlews but with straight beaks and forage along the foam of the wildest seas), slow pelicans and speedy seagulls... also, sadly, scores of mysteriously dead murres on the sand (these are alive gulls in the picture, at their gathering-place on Roosevelt beach.) 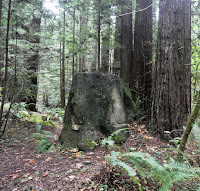 I started a list of best-bits, including the Nancy Cassidy concert at Cyprus Meadow on Friday where Mo provided brilliant support... woodland walks like the ancient forest along Purisima Creek...  the fantastic Bar Bocce on Sausalito harbour-front... taking thousands of photographs of flora, fauna, and just about anything... and simply sitting in the yard on sunny evenings with Anja and Mo, sipping prosecco and watching the sun go down.

Of course Frome being the hotbed of creativity it is, I've inevitably missed much ~ music from great names including We Used To Make Things, Fat Stanley, Three Corners, and local favourites like Back For Breakfast, Steve Loudon (looking forward to tasters of all these in photographer David Goodman's archives here soon) ~ and there were no party-poppers to celebrate Jeremy Corbyn's brilliant landslide victory. But I did manage to participate in the Dismaland experience, by rousing at 4am to go online for tickets when the box office opened and finding after lots of clickings they'd already sold out, thus satisfyingly replicating the dismal experience of typical modern life that Banksy, bless his perverse dark mind, is keen to share with us. 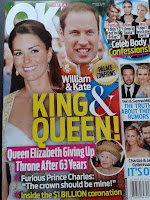 So as I wait at San Francisco airport for a flight as yet only slightly delayed, I'll end with thoughts of England: one of the many marvellous pictures of hope, and the cover of a US magazine where news of our queen's abdication is sadly much exaggerated. Though as a republican I can't share the enthusiasm for new queen 'Duchess Kate'.