If you want your theatre visceral, challenging, and provocative, one way is to create a promenade performance of a Beauty and the Beast fairytale with undertones of racial hatred and overtones of sexual abuse and stage it in the tunnels under a railway station. Alternatively you could envisage a more contemporary existentialist fable about an actor pretending to be a hypnotist juggling illusion and reality and questioning the nature and role of theatre itself. Annabelle Macfadyen came with me to Bristol on Thursday, and we saw both... 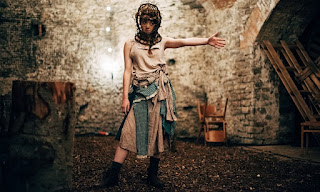 The Stick House from Raucous is the gothic fantasy and the vaults below Bristol Templemeads make a fantastic venue for this story fusing film, music, and digital technology with live performance from a trio of actors: the girl, the woodcutter, and a hobbledehoy played brilliantly by Christopher Elson as a combo of Mad Tom and Gollum. The script seems slightly overweighted with narrative but lighting effects are brilliant, especially the burning stick house and the falling barriers at the ending 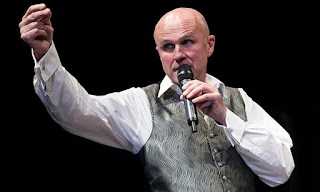 - 15 minutes after which we were panting into Bristol Old Vic studio theatre for our second show that night: An Oak Tree, Tim Crouch's multi-award-winning two-hander in which he plays the hypnotist who accidentally killed a girl, and a.n.other actor ~ different every night ~ plays the grief-sodden father who comes to challenge him.  Finn Gill, who took this part on our night, like all the others over the ten years since the premiere, had not seen the script before the show and simply followed directions, some audible and some not.
Experiencing these two extraordinary productions contiguously made comparisons as well as contrasts inevitable. Both work through emotional intensity rather than story-line, and both rely strongly on audience involvement. In The Stick House this was overt as we followed the action with name-cards round our necks, carrying wicca dolls, and with marks on our wrists to identify our vulnerability in this alien place where no-one, friend or beast, could be trusted. In Tim Crouch's piece the unease seems contained onstage by the hypnotist in emotional meltdown and his unrehearsed co-actor and there are no visual effects at all: his story contradicts the evidence of our eyes and minds but the illusion is as compelling and the provocative impact equally strong. An amazing night. 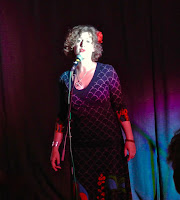 There are other compensations, as well as radical theatre, for arriving home in a rain-wave: as well as friends, family, and creative planning meetings (next production from Nevertheless is stirring into a nice little toxic cocktail) there's always arty events and music. A fabulous Grain Bar Roots Session on my first evening back featured Bonne Nouvelle playing molten & moody covers with a 'gritty underbelly', vocals from Coralie Hyde and John Ruddock on guitar. And while the local artists exhibition is still up in Black Swan Gallery, the Round Tower proved a great space for the 6 x 9 exhibition from Bridport which opened on Friday curated by Kit Glaisyer and Frome's indefatigable Paul Newman ~ how does he find time for his immaculate prize-winning drawings? 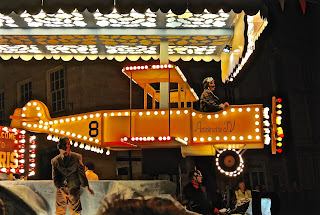 We've had a fair in the Market Yard all week in anticipation of Saturday's big event: Frome Carnival procession takes over an hour to make its glittering way down to the centre of town with bands, majorettes, fantasy royalty, comedy acts, themed costumes, and dazzlingly decorated floats playing music loud enough to drown their generators. Frome Rotary Club, who steward & shake the collecting buckets, were on hand with long props to deal with overhanging branches, though the Magnificent Men in Their Flying Machines (my favourites) had a long wait when bunting threatened to sabotage their flight to Paris.

To end on a less noisy note: Bath's annual Jane Austen Festival has been 'celebrating all things Austen' for ten days, and I went along on Sunday as Rosie was reading a chapter of Emma in the Library. Ladies in sprigged gowns & bonnets could be seen making their way between talks on 18th century issues like breakfast, phaetons, and 'Discomfort' (that one sounds intriguing), and workshops on Regency dance, archery, and harp, or an indepth look at the reticule. Outside Waitrose Cafe two homeless men sat on carpet strips and the man next to me started talking about Corbyn's housing pledges and hoping he 'gets in' next time. It took five days, but I feel I'm really home now.
Posted by Crysse at 9:08 PM