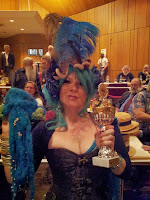 Frome's Queen of burlesque Muriel Lavender last week went to Leinfelden-Echterdingen to compete at the World Beard and Moustache Championship and came home with a runner-up trophy. Her Whiskerina triumph is featured by Frome Standard with the venue located obliquely in 'Germany' but with some comely shots of our Muriel, whose lippy talents are now turning to chocolate as she'll be judging succulent limericks at the Chocolate Festival  on Sunday 17th November at the Cheese & Grain. Only a quid, have a go!

Travelling metaphorically even further afield, the exquisite mandalas on exhibition at La Strada this week have all been inspired by Tibetan art, all meticulously hand-painted by Frome musician Pete Gage. Like Muriel's beard, they're more complex than a mere copy: Pete introduces Celtic themes, graphic design skills learned at St Martin's Art College in the sixties, and striking colour combinations to create enigmatic pieces with depths and even movement below the surface of their immaculate precision. You can buy, and commission, through Pete's website.

Moving my virtual sat-nav to Bristol for this post's footnote (sorry about these appalling segueways, I'm finally feeling better so probably all part of the detox process) Nevertheless Pub Theatre prepares for our next production: Festive Stockings, an evening of short seasonal plays which will be premiered in The Cornerhouse and then professionally performed onstage at the Alma Tavern Theatre in Clifton.  Frome Scriptwriters have been fine-tuning their dramas at our last few workshops and Rosie & I now have ten script submissions to send to our director for his verdict on the final choice... more details soon!
Posted by Crysse at 4:30 PM