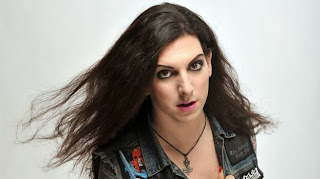 I had no plans to watch Andrew O'Neill is Distracted  at the Merlin until I saw him on Stuart Lee Presents, when attendance became irresistible - not a general response unfortunately, as Andrew had a sparse sample of Fromies to analyse in his what-kind-of-audience-are-you routine. 'Offensive, yes, but also politically acute,' he commented, pointedly, after a paedo gag didn't get us rollicking. His 1980s heavy metal references were a bit over our heads, too, but by the interval howls of mirth were rocking the empty-ish aisles. The first half of his act had delivered everything you could want from standup: sharp observational comedy combined with surrealism, delivered in a noisy, unpredictable way and very very funny.  The real impact came in the equally hilarious second half, when Andrew talked about being a transvestite, how he's dealt with stigma, and about his ADHD. He's come to enjoy both, he says, and encourages everyone to accept and welcome their own distractions ~ for their mental health's sake.  For a black-metal occultist comedian, Andrew O'Neill has big humanity and talks much sense. 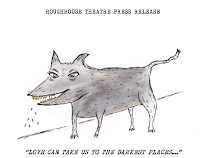 Henry Walker and the Wheel of Death was adapted for theatre by director Shane Morgan from the novel Mr Sebastian and the Negro Magician by Daniel Wallace. The author apparently agreed a title change was a good idea. Roughhouse Theatre took on this ambitious project, which was performed at Bath’s charming Rondo theatre. The story opens with profound and beautiful words taken from Carl Sagan's 'vision of the human future': Our planet is a lonely speck in the great enveloping cosmic dark, to introduce this tale of a man first white then black, and his struggle to become a magician. Another fitting quote might be Tolstoy’s observation that each unhappy family is unhappy in its own way. Specifically, Henry is unhappy: his mother is dying, his father is drinking, and his sister is besotted by a dog. Henry, well played at this stage by Dan Gaisford, unwittingly enters a Faustian pact with mysterious Mr Sebastian and discovers that by acquiring magical skills he has traded his beloved sister Hannah (excellently played by Madelaine Ryan.)  Much of the twisting plot offers metaphors for human life ~ as commented on, perhaps overmuch, by external narrators including a greek chorus on microphones side stage. Vast red curtains create a circus-like environment for the story as Henry changes persona, goes from riches to rags, and finally disappears but this "dark fairytale” is also an allegory of human life. Cue Sagan again: In our obscurity, in all this vastness, there is no hint that help will come from elsewhere to save us from ourselves. Or, as the narrator puts it: "You need to let go of the past when the things you have to remember are sad."
Interestingly, the original story is set in a Southern US town in the 1950s and starts with the disappearance, focussing on the search for the real Henry by three outsider-status circus friends. Possibly this, rather than featuring the change in Henry's pigmentation, might have offered more dramatic scope ~ but new approaches and bold ideas should always be applauded.

Fictional footnote: Enterprising Clare Reddaway, doyen of Bath's spoken-word Story Fridays, has branched into audio and I’m delighted one of my stories has been selected for recording. Sisterly Love will be on the Word in Your Ear website soon.
And before winter closes in on us like Andrew's menacing claw-hand descending on the guy in front row on Friday night, here's how Stourhead does autumn...
Posted by Crysse at 7:51 PM

Email ThisBlogThis!Share to TwitterShare to FacebookShare to Pinterest
Labels: Andrew O'Neill, Henry Walker and the Wheel of Death, Rondo, Stourhead