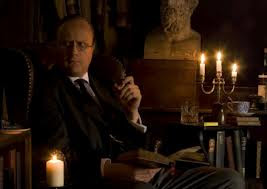 Ghost story aficionados probably already know the name  R M Lloyd Parry as synonymous with thrilling dramatic exposition of the genre, but to me Count Magnus at the Brewery was a total sensation. The set is perfect to evoke late 19th Century gloom and slightly sinister candlelight, and his story-telling, in the style of a garrulous club member, makes it seem that every phrase has been chosen in the moment for this particular recounting of the M R James tale. Ghoulish spookiness is entwined into the narrative with elegant sparsity ~ only the occasional hint ("Mr Wraxall paid dearly for his curiosity...") until each dreaded and dreadful occurrence, never fully described but evoked with terrible sounds... "I heard one cry out and I heard one laugh, and if I cannot cease to remember those sounds I will never sleep again." Weird shit at its best. 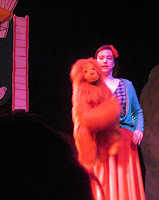 Story-telling of a different kind from Big Wooden Horse whose half-term offering STUCK used songs and puppetry to embellish a direct-to-audience approach in this tale a tree-trapped kite requiring imagination & ingenuity to dislodge. The show is surprisingly close to Oliver Jeffers' picture book in imagery and Stan,6 and Joe,3 gave it thumbs-up from their booster-seats at Frome's Merlin theatre: Stan enjoyed the shouting and Joe the fire-engine but my favourite bit was the orangutango-dancer.
Posted by Crysse at 6:00 PM