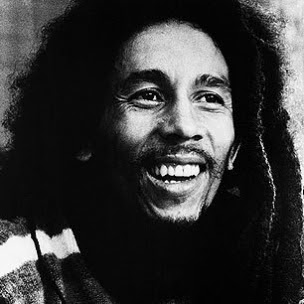 Where were you when you first heard Bob Marley? I was living in Edgware in 1977 when Jamming came on the charts show, and I stared at the radio on the worktop transfixed. I think that’s the only reason I remember that kitchen at all.
Marley, the powerful & moving new film from director Kevin Macdonald, picks on personal connections like that and enriches their colour & volume. It’s on general release next week but came to the Little Theatre (visited often by Haile Selassie in his exile years) on Sunday for a special premiere showing. There’s more than I needed about Bob Marley's final sad weeks, but most of the movie comprises convincing, compassionate, and appreciative tributes to his 36 years of vibrant living. We had a kind of bonus track too, a post-show discussion between Kevin, a journalist who remembered Bob from the '70s, and Benjamin Zephaniah who spoke passionately about the poetry of the songs. And the legacy of Bob Marley? All three knew their answer to that one: Roots reggae with a serious message has gone around the world, a unifying element to warring underclass communities. You don’t have to be a Rastafarian to connect with Marley ~ when the Tunisian greengrocer killed himself and started the Arab Spring, STAND UP FOR YOUR RIGHTS was the message on the wall next day. As producer Lee "Scratch" Perry said in the movie, people like his music because "he has a story to tell and him tell it in a way you have to believe it ~ him tell it pity-full.”

You know the way when you decide to move you suddenly see For Sale/Rent signs everywhere? It’s an acausal connecting principle, Jung said, something to do with the space-time continuum and indestructible energy. And archetypes & the unconscious, naturally. It’s happening to me around my play Mascara, as the start of rehearsals approaches. The main theme in my play is the fine line between love & collusion, and one key question is about early experiences. Received wisdom is that we need the smoothest possible slide from the slipstream of childhood into the turbulent waters of adult life, and certainly we’d all prefer that for our loved ones. But I keep seeing & hearing memories which cut across that assumption. One of the most moving sequences in Marley is when Bob, considered a half-breed in his black neighbourhood, goes to find his white father and is brusquely rejected. He goes home and writes Cornerstone
The stone the builder refused
will be the head cornerstone. 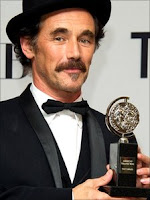 And in a book of essays by Adam Phillips lent to me by Emily there’s another example of extreme resilience: Paul Steinberg, writing about Auschwitz in Speak You Also, speculates as to whether his unhappy childhood prepared him for his survival, posing the question: can a ‘good’ childhood prepare one for life?
I’m not arguing that Goethe’s maxim ~ if it doesn’t kill you, it’ll make you strong ~ should justify any & every kind of cruelty, obviously. But it does seem that some setbacks will feed creative determination. Mark Rylance, in a wonderful interview (on on BBC3), recalled being "the kid who didn’t speak”, unable to form consonants even with intervention from a speech therapist. It was a passion for private improvisation that got him through ~ he likes to think, he says, that being Captain Kirk and Spock was how he found his voice.
And that’s another synchronicity of thought, too, because Mark Rylance is patron of Stepping Out Theatre Company, whose director Mark has gone on record to call “one of the most inspirational theatre artists I have encountered in the last ten years… (he) does not shy away from the possibility that theatre is a transformative and healing activity which brings joy into people’s lives… “ And where the synchronicity comes in again is that ~ excitingly and luckily for me ~ Stepping Out is producing Mascara. 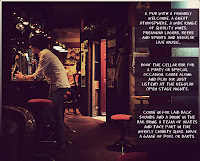 Finally, in this long posting: Thanks to Richard Carder for an excellent Poetry & a Pint night last night, where Rose Flint and I were guest poets. I forgot to take a photo so here's a picture of St James Wine Vaults. A good venue for boho atmosphere.
Posted by Crysse at 11:00 AM

Email ThisBlogThis!Share to TwitterShare to FacebookShare to Pinterest
Labels: Little Theatre, Mark Rylance, Marley, Poetry and a Pint, Stepping Out