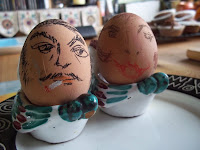 The annual Egg celebrations brought a flurry of fun events concluding with Daffodil Day in Mells. Mells is a picturesque village where war protest poet Siegfried Sassoon is buried, with grassy banks that host enough golden daffodils to scatter any Wordsworthian clouds. 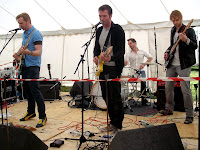 They're always wilted & rainsodden by Easter Monday but luckily there are other rural lures to entice the thronging crowds: stalls of homemade jewellery, cup-cakes, knitwear & knick-knacks line the route to the tents of ale and hog-burgers. It's a lovely walk from Frome through Vallis Vale, wild garlic thick between the burgeoning trees, so I braved the drizzle and squelched through two miles of mud which earlier that morning had been the riverside path and was rewarded by brilliant local band Centrefolds in the music tent.

A word about the recent Persectives on Shakespeare before it disappears from i-Player: Lenny Henry's theatrical epiphany is well-documented (Northern comic does Othello to rave reviews!) but this programme explores deeper, aided by The Wire's Dominic West, Barry Rutter of Northern Broadsides ("Iambic pentameter is based on the heartbeat, that's why the plays are so bloody muscular") and London rapper poet Akala, demonstrating that many lines in Macbeth are indistinguishable from gansta rap lyrics. "Everybody deserves some Shakespeare in their lives" concludes Lenny cheerily, and unarguably, from the corridors of a school in Norwood near where I went to school. Wish he'd been around then.
..
Posted by Crysse at 7:00 PM

Just discovered your blog - good stuff. We too were in soggy Mells on Monday!

We seem to share an interest in the cultural life of this corner of Somerset. Rumour has it that there will be some Shakespeare on Frome-FM this summer...

Thanks for the comment. We're lucky, aren't we, to have so varied a cultural life in our corner!