A Curious Evening of Trance and Rap with the Ogden Sisters at Frome's Merlin recreated obsessions of Victorian spiritual delusion in an extraordinary entertainment of magic, mystery and morbidity. Some of the otherworldly trickery – psychic revelations of audience handbags – was mysterious enough to provoke interval analysis, some – the spare arm & other antics after limb-constraint by audience members to demonstrate authenticity of manifestations – were hilariously fake. Audience participation was non-optional: we were all blindfolded for a sensory 'astral' train journey - though it was worth peeping to catch one of the sisters having a quick man-break with a fag while the female siblings dashed around waving lavender scents and squirting mister sprays. The sisters were all compelling, especially the medium Electra struggling between Victorian docility and Victorian hysterical insanity.

But it's not all trickery and titters: the tale is rooted in social realities as well as historical data about such soirees. Unpalatable truths about treatment of children and women emerge, showing how fascination with the next world was inspired more by despair than scientific curiosity. This world, as the eldest sister reminds us, is a pig’s arse.
It’s a little bit overlong, especially the farting and the final manifestation, but as theatrical entertainment enjoyably inventive. As the man next to me in row B said, how often do you sit in the auditorium all holding hands while the audience tie up the actors? 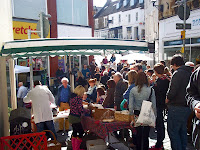 Californian skies continue as our un-English spring moves into April, making this time seem more for getting out and about than for writing. Last weekend bloomed with arty stuff 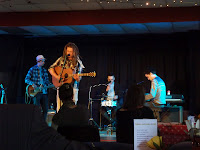 - Sun Street Chapel exhibition concluded with a Saturday night dance, the Artisan Market thronged Frome's Catherine Hill on Sunday, and in the afternoon I cycled lanes glittering with blackthorn blossom down to Nunney for an excellent Acoustic Cafe headlined by the Daturas.


And finally: thanks to Plan B for stepping into the news this week to blame arts funding cuts for last year's riots in a great NME interview, giving me a chance to post his new release Ill Manors.
..
Posted by Crysse at 11:00 PM

Email ThisBlogThis!Share to TwitterShare to FacebookShare to Pinterest
Labels: A curious evening of trance and rap, Nunney Acoustic, Plan B, Trifle Gathering