Stay out of Somerset. They don't like writers there. That's the opening of the lead feature in Mslexia this month on SCC's ' institutional philistinism' - as writer Celia Brayford understatedly calls it - in axing the entire arts budget. How does it feel to live in a county nationally shamed for indifference to both culture and community? Not good. The irony is that as well as enormously enriching, creativity isn't even costly - as Celia points out, a toll booth on the road to Worthy Farm collecting a quid from every festival-goer would cover the entire budget. And then there's the onslaught on the Libraries: 24 out of 30 in Somerset to go. I was one of the team outside Sainsbury's this Saturday collecting signatures on the petition against the closures, and public support was heartening so maybe this at least is one battle we can win. If you live in Somerset, and haven't signed the petition yet, please do.

So with the future of books in continued jeopardy, where do you stand on the e-book? Not literally, of course, you'd break your Kindle. But this highly contentious issue isn't going away, as the editorial of the new issue of The Author - journal of Society of Authors, our trade union - acknowledges.
Will the boom in e-books lead to more people reading or simply siphon readers away from the print? is the anxious question. There's one note of encouragement on the letters page, from author Stewart Ross: Following the discussion on e-books at the Society's AGM, I asked children in several schools I visited, would you prefer to have all your books on one electronic reader or as lots of separate paper books? Answer overwhelmingly (with teaching staff alone in their dissent) was in favour of the former. Clearly the next generation do not share our sentimental attachment to crushed trees - or perhaps they don't share our mistrust of technology?

Also mistrusting the democracy of technology is newspaper columnist of the year (1995) Andrew Marr, who has been reflecting on citizen journalism. "A lot of bloggers seem to be socially inadequate, pimpled, single, slightly seedy, bald, cauliflower nosed young men sitting in their mother's basements and ranting." (Not a big fan of writerly solidarity, then, Andrew?) This is the month I officially join the cauliflower-nosed tribe, as I'm continuing my blog but concluding my regular column in Writing Magazine. It was back in 1994 when I submitted, on spec, the first Good Practice piece - deconstructing a short extract of published prose to show why it works then suggesting a related writing exercise. 17 years is long enough for any formula, and now my personal passion has shifted from fiction to stage drama, I'm looking forward to being able to read for relaxation again, without any analytic agenda. 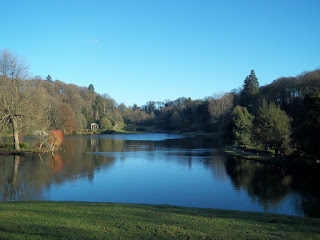 And as this has been a rather wordy posting, let's liven things with an image: Stourhead last Sunday - frost on the grass but a promise of better days ahead.
Posted by Crysse at 6:00 PM

Thanks for your help on Saturday at Sainsburys.
Love the pic. Have spent the day reading about libraries everywhere. Your pic cheered me up!
Diane Ashman