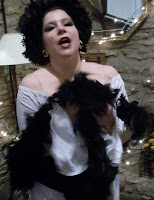 "Sex" announces Muriel, rehearsing randomly for her solo gig at The Bell in Buckland Dinham. The rehearsal was hilarious though I was in Bristol on Thursday so missed her much-acclaimed performance of poetry and wit burlesque-style, but there will be more... Muriel emerged from the Poetry Platter night at the Merlin, so I am of course claiming to be her chrysalis-unzipper, but - of course - Muriel Lavender is her own exclusively marvellous self and will continue to be so.

The reason I was in Bristol was Word of Mouth, BOV's monthly spoken word showcase, compered by Byron Vincent and therefore unmissable. There's only one thing funnier than the eccentricity of Byron Vincent's animated diatribes against social absurdities like X-factor and social network messaging, and that's his delivery. I start giggling as soon as he shambles onstage talking, only controlling my chortles so's not to miss some querulous gem like the atheist preacher who buggered belief and the maniac who married a hobnob with two kids eaten by ghosts, or his extended family alighting on facebook like a swarm of semantically challenged locusts... (any more and I'd be spoilering you...)

Byron's intros make a hard act to follow, but the main show, Tim Clare's Death Drive, lived up to the Edinburgh festival hype. The title links a suicidal impulse ruined by parental intervention ("like dancing, seeing your Dad attempt something you want to do is not cool") with Freud, and a moral emerging somewhere between a psychic horse and the stain on the ceiling from the dead man upstairs: time is longer than hope, and longer than sadness too. Tim Clare has an engaging confidence and a ukelele: his story is a funny, tragic, reflective, mix of interactive banter and breathtakingly lyrical poetry.

As a vigorous and vocal anti-royalist I had no more intention of seeing The King's Speech than watching William's forthcoming nuptials but a recent viewing of A Single Man on DVD changed my mind. Isherwood's tender, intimate, study of lonely grief, I felt, could not transfer to screen and especially not with Colin Darcy Firth playing the main character. How wrong I was, and this is now one of my favourite movies: script succinct, acting impeccable, and visuals, for tonal range alone, stunning.

So to give my prejudices another dunking I joined the queues for this massively hyped docudrama.
I'm quite glad I did. Colin Firth apparently ached physically after his scenes as voice-throttled Prince Bertie, and it's not hard to see why - or to see why the O-word clings tight as a tic in all talk of his performance. But the most adamant republican need not fear filmic fawning: this cold, bullying, dysfunctional family is shown as unequivocally inadequate to be the crowning glory of any society with aspirations of humanity. Audiences seeking fairytale rapport between prince and commoner would be disappointed: far more cleverly, what we were shown was that the king's momentous speech about The War was nothing to do with Hitler ("I don't know what he's saying, but he's doing it jolly well" stutters the Bertie enviously) and everything to do with his own personal enemies - his unforgiving childhood and his stifling larynx. I give it a worthy 3 stars.
..
Posted by Crysse at 9:00 PM