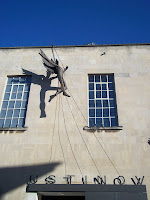 Another week in theatreland: a reading at the Ustinov of Kate Mitchell's new play about the impact of autism on parents (divisive, especially if the therapist is useless) followed by a meeting there of the SWNWN, the group that sounds like a long sneeze whatever way you say it. The need for a broad spectrum of ecology featured, with much talk about it and about, as Omar Khayam might say (the poet not the bomber); and as convener Frances Macadam pointed out, networking is the main point of a scriptwriters' meeting.

Bristol Ferment has simmered down, with the next show-case of local writing not till the summer. I caught another couple of these very varied presentations: the most polished was The Morpeth Carol produced by Sleepdogs,Timothy X Attack’s quirky, funny, moving, fairy story – unseasonal but would be fabulous on radio next Christmas. It’s the tale of a ten-year-old who meets santa which may sound whimsy it’s not, it’s tough talk from the first image of a crashlanded sledge and burning reindeer. This is not a jolly bearded gent, this is a fallen god of the tragic-greek variety. He doesn’t know where he’s landed, but he can empathise with a bullied child, and hotwire a Peugeot too. Nice one, as ten-year old Harry would say. “The universe is a terrible place, that’s a fact", don’t-call-me-Santa tells his new elfin guide as they hurtle from the carcases to deliver the presents, "but it’s not an important fact." 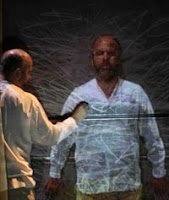 Excellent audio effects, and the images created by a great script glowed a long time after.
And later the same night: Guy Dartnell hopes his work in progress Something or Nothing will be more of the former by the end, and having seen an earlier more polished version with lighting, I’m quite sure it will. 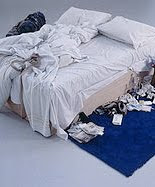 Exciting news of the week for me and Rosie Finnegan is that preparations for FOUR IN A BED are now underway! Nothing at all to do with naughty Tracey Emin's slutty artwork (but I'm sure she won't mind me nicking the image, until we get our own), this is a Nevertheless/Bootleg co-production of four short plays, two by Rosie and two by me, each of which feature - yes you got it. A bed. We haven't actually got one yet, but are hoping to borrow a sturdy single bed that will fit in the company's van, since after our launch Upstairs at the Lamb, the show will tour to Salsbury and beyond. If you live anywhere near Frome, put March 10th 11th and 12th in your diary, rustle up a posse of friends, and prepare to be tickled, touched, and generally highly entertained.

Finally... I don't usually buy newspapers, preferring to browse online find a café comp, but over the last few weeks I've been grabbing the wonderful

on a near-daily basis. Content is slightly skewed to the twiterati, I grant you, but all the news opinion of the day, succinctly splayed, for twenty pee... I rest my case.
Posted by Crysse at 5:00 PM

Email ThisBlogThis!Share to TwitterShare to FacebookShare to Pinterest
Labels: BOV From the Ferment, Nevertheless, swnwn, the i