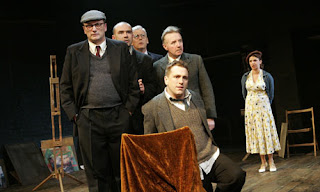 The Pitmen Painters is Lee Hall's second look at the Billy Elliot fairytale: talented lad finds his creative wings and flies from Northern working class background to fulfillment and fame. Except that Oliver asks for less not more, and stays, whether from fear or loyalty, with his colliery clan. In Lee Hall's version of the Ashington Art Group history, the untutored artistry of the men doesn't appear to thrive from their contact with acknowledged masters; their paintings become generic and like the tenets of socialism lose significance except as glimpses of a pre-war era.
The play has been much admired, and the comic culture-shock between the tutor and the miners ("A Titian." - "Bless you!") certainly went down well with the Bath Theatre Royal audience. I liked the way the broad strokes of farce paralleled the men's initial crudity in artistic self-representation, evolving as did their paintings gradually into more complex and feelingful presentation of the integrity of their lives. But just as Oliver's work is ultimately critiqued by Mrs Sutherland, whose patronage he refused, as sentimental and conformist, in the second act the play too seems to lose its strength. The characters represent a range of attitudes to art and politics which like her ex-protegee's later painting is "perfectly fine, but undeveloped. No sexuality, or desire, or elemental hunger, no sensuality or yearning for the other." Mrs Sutherland admits to losing interest in painting, but she could make some salient points about playwriting.
It's a National Theatre production, obviously very well acted and stylishly put together, but it made me nostalgic not only for pre-1995 Labour and debates on the meaning of art but also for plays like Chicken Soup with Barley and The Corn is Green where characters grew from their class roots rather than representing them.

What do you do when you can't decide on a cover for your new novel? My friend Christine Coleman has an ingenious solution: put it to the vote. Chris has posted 7 options - what's your view? This was my favourite - pick yours & you could win a copy of this fascinating self-discovery novel.

And while I'm on the injunctions, will everyone in striking distance of Frome please come to see Inua Ellam's award-winning one man show The 14th Tale at the Merlin next Friday. I'm doing a curtain raiser in me posh Plinth frock so don't be late...

Finally, thanks to all those who emailed me after hearing my story Mrs Somerville's Garden on the beeb last week - I didn't even know they were repeating it, so your appreciative messages were a nice surprise.
..
Posted by Crysse at 3:09 PM

It's getting really fascinating,receiving so many entries for this Challenge! Almost every one has a valid, but different reason for selecting their own choice. I had no idea there could be so many ways of looking at these seven pictures -I'd love to get a whole lot more entries to see if enough people will agree about the same cover!
I was firm in my own preference before I started this Challenge, but now my "Certainties have been shattered"