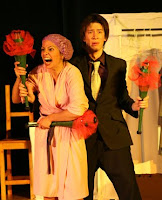 Every writer once in a while should stop wrestling with words and spend an hour watching Pangottic. I came to that conclusion after watching Full Twist at The Brewery, Bristol's newest theatre venue, where two extraordinarily talented youngsters told a love story full of pathos and hilarity, crammed with insight as well as dazzling circus skills, breathtaking timing and irresistible audience rapport. Two love stories, in fact, as in a quirky subplot the cleaning staff find romance over rubber gloves. And the young lovers manage to juggle the hopes and insecurities of relationship along with the high-flying wine bottles, flowers, and ultimately babies. Without a single word. Show-don't-tell doesn't get any less, or more more-ish. 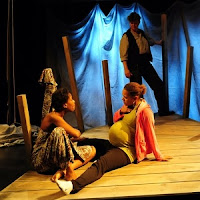 In all the shameful history slave ships, the story of Liverpool ship Zong must be most dreadful. Half their cargo of stolen lives was jettisoned for insurance. One survived, to carry the tale which became the stimulus and background story of Crossings by Julie McNamara, who also takes one of the 4 roles. The anger is plangent, and this piece might have become a history lesson in other hands, but Julie's passion is more wide-reaching: the central story is of 15-year old Shelley, pregnant and on the run - a beautiful wild-child powerfully portrayed by Nadine Wild Palmer - but the theme is man's inhumanity to man, and more especially to woman. Julie's aim is to confront disablement in all its forms; the BSL interpreter is not sidelined but takes a central role and the piece was originally written for a blind actor. Ironically, and very sadly, she wasn't able to appear at the Tobacco Factory and it's to the credit of both the script and her replacement Naomi Cortes that the use of script-in-hand enhanced rather than detracting from this theme of challenging social attitudes and expectations.

Mustn't end the week without sending congratulations to Josh Tyas, one of the talented young writers on the Villiers Park writing group I co-tutored with Rosie Jackson last year, for winning the Farrago Fireworks Poetry Slam! Go forth and sparkle, Josh.

And finally: I haven't read Giles Brandreth's just-published diaries, enticingly titled Something Sensational to read on the train, but reviews are discouraging. "He lacks the qualities looked for in a diarist" declared the Spectator: "he is minimally bitchy, shows a discretion that the reader applauds but does not rejoice in, and doesn't shag about." Blogger beware....
..
Posted by Crysse at 4:00 PM