Inua Ellams comes from a long line of trouble-makers: from the moose-meat-thieving grandaddy who ran 'so fast the earth gasped and forgot to take footprints', this poet-performer has skittered, scatter-brained, he says, from Nigeria to London, to Dublin and back to England, learning about life all the way. The after-show talk is one of the best I've ever heard, feelingful and generous of experience. His work is totally truthful but only 80 percent true, since "there is no such thing as autobiography - there is art, and lies." The most difficult thing to write about, he says, is ourselves, and his main influence in creating The 14th Tale was hip-hop: "a voice that pumped beauty into my ears, with rhythm, and narration." A beautiful, inspirational, voice. It was a total privilege to share a stage with Inua. My 'curtain raiser' recounted my experience of the 4th Plinth this summer - a great chance to wear The Frock again. Thanks, Howard & Chris, for doing such a great job on the visuals. (The hour is still online, if you click this link.) 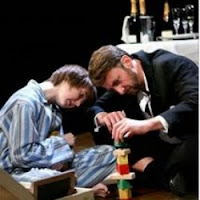 The abuse of power is a perpetually relevant theme, says Simon Godwin, director of The Winters Tale concluding its national tour at the Tobacco Factory. This production is set in pre-fascist Italy, but Sicilian king Leontes - powerfully portrayed by Vince Leigh - is a paranoid tyrant whose incandescent jealousy has little to do with politics. It's been dubbed 'the difficult play', allegedly for the contiguity of brutality and buffoonery, but the repetitions of cruelty are the biggest problem. Even the 'solution' seems to owe more to psychological abuse than miracle.
For me, the men, and male emotions, were the main strength in both tragic and comic scenes of this production. The 16-years-later second act is structurally challenging, with its combination of new characters and continuing griefs; Polixines (James Buller) had convincingly hardened, but the shepherdess had morphed into Catherine Tate's granny, and Perdita was a disappointment, clad in charity shop frock and fun-run plimmies, and disturbingly hyperactive. But I did cry, a lot, and a winter's tale should be sad, as the little prince said. Before he died.

Maybe it's down to over-hype but the new series of Gavin & Stacey didn't do it for me. Barry has always been a bit of a Craggy Island, and its inhabitants several celery sticks short of a crudités medley, but writers James Corden and Ruth Jones have been insisting, on wall-to-wall radio interviews, that they want this story to be 'real'. A pity. There was a moment, as Uncle Bryn's voice soared in "Something Inside So Strong" at little Neil's christening, when I really thought the entire congregation would lift off, bouncing and bounding like in The Blues Brothers, and maybe we would have a moment of superb surreal comedy. But no, it was back to Abigail's-Party parody and low-key sentimentality. I'd so hoped to go on loving this series but ended up wanting to flick through my cellphone contacts like bad-girl Rudi "Just seeing if I can find someone who gives a shit".
Posted by Crysse at 1:12 AM