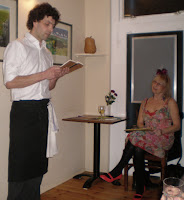 James Stokoe brought us Euridice and Rose Flint evoked Venus: "If love isn't around a Mardi Gras, I don't know where she'll be." A fantastic range of delightful reads and performances. 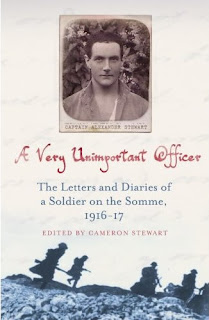 Actor Cameron Stewart found his grandfather a hard act to follow, so instead he's chosen to take that act around the country as a one-man show called 'My Grandfather's Great War'. The grandfather is Captain Alexander Stewart who fought in the three major assaults of the first world war with extraordinary heroism and survived to tell the tale in a handwritten diary forming the basis for this performance, which reached the Ustinov in Bath last week. The diaries have much of the grim humour of Blackadder Goes Forth, including their own genuine General Melchett who agrees one particular mission is deathly lunacy but adds that it's the Brigadier's order, so "do your best, eh?". An amazing record of a man of exemplary moral qualities, but for me the most powerfully affecting words were the grandson's own as he ends his proud and passionate tribute: "I'm confused. All war is abomination. What the devil did you think you were doing, running around in the mud slaughtering each other?" 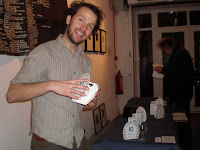 Change of pace again on Saturday, with the launch of the Concertina Books weekend event at Widcombe Studios in Bath. Ruralist writer Peter Please is making a stand against the mass production of books, creating instead something 'quirky and individual' which combines old and new technologies. He has the support of John Moat, co-founder of the Arvon foundation, and several luminously talented writers and artists who contributed words and images to the project. There were readings too, some gentle, some charismatic; the whole evening a reminder that prim Bath can do bohemian, delightfully, too.