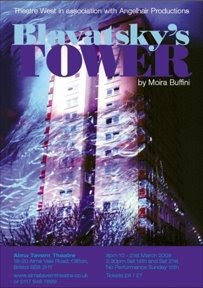 Black comedy hour again... Blavatsky's Tower (at the Alma Tavern Theatre till March 21st) shows Sartre got it wrong: Hell is not other people, Hell is an agoraphobic family incarcerated in the top flat of a tower block with a crazy father who is the architect of this cultural monument to dysfunctionality. Gaudi built his cathedral high so the angels could reach it easily but angels aren't so easily lured here. Even the doctor who staggers up fifteen flights with an armchair can't save a trio who have normalised incest and incineration of their father's corpse in the roof garden. "We used his copy of Paradise Lost to start the blaze." And the comedy comes in... where exactly? Oddly enough, quite a lot, in Moira Buffini's script and in the actors' interpretations of this Chekhovian family dynamic, where the 'crushed' world below the high-rise is their own unattainable Moscow. Oliver Millingham as the patricidal son is especially moving.
..
Posted by Crysse at 11:40 PM