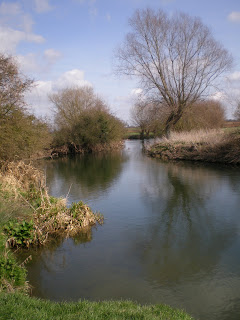 An idyllic weekend staying with college-days friends, chewing the fat and the Mothers Day chox and doing a lot of walking. We went to Grantchester, famously the haunt of Rupert Brooke, where the orchard is now a hugely popular cafe so there is indeed honey still for tea. You can also pick up a free booklets about the 'Grantchester Group' which apparently comprised Forster, Russell, Keynes, Virginia Woolf and Wittgenstein as well as the soldier poet. Alongside photos & poems there are intriguing quotes, like Keynes on camping: don't make one nearly so ill as one would suppose, Woolf on Forster: I always feel him shrinking sensitively from me, and Russell on Wittgenstein: he would never have noticed such small matters as bursting shells when he was thinking about logic. There's a little museum too, with pictures of Brooke's grave and statue on Skyros which made me nostalgic for the those Greek skies. Here's the yet unacademic stream, along the river walk to Cambridge. 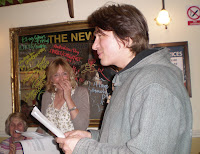 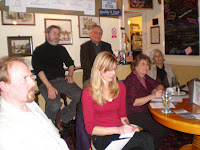 "We don't care if it's by a man or a woman or a dog, all we care about is the story" is what women's magazine editors say, according to Alison Clink's encouraging talk at the Bath Writers Workshop where she and I were both guests on Wednesday. We were warmly welcomed by hosts Kevan Manwaring and David Lassman, and found the writers of Bath a friendly and participative audience. No canine members, I'm glad to say.

A retrospective footnote this week: positive feedback on Chimes of Freedom in the local paper (read the review here soon) and from our illustrious lead reader, who enjoyed the ‘radical’ edge in Frome - and thanks, Sharon, for the positive vibe on your blog!

It's appropriate maybe I discover 70s cult classic Harold and Maude this week. Elderly Maude has a sound philosophy of life - "Everyone has a right to make an arse out of themselves" - and a catchy theme song if you want to sing out, sing out and when young Harold gives her 'the nicest gift anyone has given me in a long time' she throws it into the San Francisco Bay saying blithely "That way, I'll always know where it is."
Which brings me nicely to my own departure, in 2 days time, for a month in California. Not that I plan to sling anything in the bay - in fact I'm not really sure what I plan to do. Watch, as they say, this space.
..
Posted by Crysse at 12:16 AM

My pleasure... and how delicious you were at Bath. Kevan Manwaring was a creative and enjoyable guest tutor on a writer's retreat I did as part of a year long course... so not surprised that their group was friendly and participative.

Have a fabulous and nourishing time in California.

Love to you... Sharon