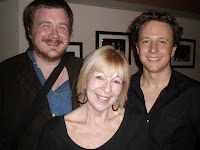 A five-star revue from Venue for On the Edge: "What characterises all four plays is efficient writing, crisp direction, and therapeutic humour... Remedy for winter blues available now at the Alma Tavern." And the audience feedback is great too. (It's all on the Stepping Out website, click on the left-hand boxes.) Makes me come over all Kate Winslet. Other purr-making comments from Bristol online listings ".. each story involving wonderfully unique storylines, all delivered with unwavering energy, this is an intriguing and satisfying way to contemplate serious issues, provoking laughter throughout a week of almost nightly sell-out performances."
And a huge thanks to my friends - more than 30 of you - who swelled the audience, and the even-more who sent good wishes when there were no tickets left.

Moving south, and back in time...

Road Hill House was the scene of the most sensational murder case of the 19th Century, and arguably responsible for the development of crime fiction as the genre we know today, with a wily sleuth uncovering secrets & lies from tiny clues and psychological tells. The building was renamed Langham House, and local spelling has changed to Rode, but it's the village I used as setting for my first novel Frozen Summer, so I found Kate Summerscale's account of The Suspicions of Mr Whicher particularly fascinating. "The dizzying expansion of the press in the1850s prompted worries that readers might be corrupted by the sex and violence in newspaper articles" she explains: "The new journalists shared much with the detectives; they were seen alternately as crusaders for the truth and sleazy voyeurs.” Freud recognised that therapy was psychic detection: "No mortal can keep a secret. If his lips are silent he chatters with his fingertips; betrayal oozes out of him at every pore.”

Still a few months before the 2009 Frome Festival brochure is out, but 2008's Short Story winners and details of this year's competition are now on the Festival website. Watch, as they say, this space.
..
Posted by Crysse at 3:22 PM

Email ThisBlogThis!Share to TwitterShare to FacebookShare to Pinterest
Labels: On the Edge