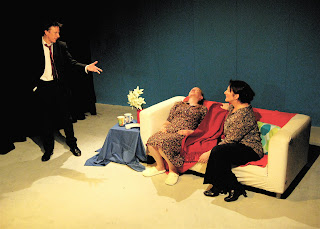 Bristol Evening Post has done us proud with their Crackerjack review of On The Edge. "...barrowloads of deft writing, some absolutely lovely comic acting and a hit of thought-provoking conundrums. Chock-full of bright ideas, a tight group of actors and a slick series of sets manage to punch far above their weight... The voracious appetite among Bristolians for good new playwrights continues to be well fed."
My favourite bit is being nominated for a medal for describing baklava as “a hamster drowned in honey”. Thanks, Sophie Lomax - and your notion of a 15-minute play as "theatrical espresso" deserves a mention in despatches too.

Reading Matters on BBC4 set out to prove that words can literally electrify us, and reading about an act creates the same brain response as doing it. Science writer Rita Carter led us through this mental maze in a blue pashmino and Tory hairdo looking like she was off for a bridge night rather than an MEG scan. Our brain, she explains, was never designed for reading or writing. It remoulds itself, like a lego truck remade into a tractor, combining the oral linguistic function with the ability to distinguish between prey & predator in order to create a new ability: distinguishing between symbols & interpreting them as language. Hence empathy. It was all very convincing. Use it or lose it, said Rita, because your brain is still on the move.

And speaking of empathy, I've been meaning to say something about Being Human (TV, BBC3) because it has more interesting stories about half-lives than smiting, rending, and shooting them to bits. Humanity, not demonising, is what the world needs now... and it's better scripted and funnier than Demons too. I'm getting very fond of the characters: Annie the ghost with self-esteem issues, George the rueful werewolf and gorgeous Mitchell the vegetarian vampire. ( Mitchell's prequel is a neat story in its own right.)

Annie's a spectre after my own heart: last week, determining to find out why she's remained trapped in a shared house in Bristol since her demise, she announced "I don't know how, but I'm pretty sure it will involve some highlighter pens and a large pad of paper." George's new thing is dating: "We need some ground rules about guests," he tells Mitchell: "- like, don't kill them."
And there's lots of love and sex and death too, what else do you need for a Sunday night sit-com?
..
Posted by Crysse at 10:00 AM

Email ThisBlogThis!Share to TwitterShare to FacebookShare to Pinterest
Labels: Being Human, On the Edge, Reading Matters

Hi Crysse,
2008's winners and details of 2009 competition now on the Festival website (www.fromefestival.co.uk/?page_id=52). You might want to publish the fact on your blog.
Cheers
Richard - Frome Festival IT support

Testing, testing...an experienced blogger I'm emphatically noooot - indeed, you may never read this unless I can haul myself into the 21st century with only the dubious 'help' of the people from google who keep sending me inexplicable instructions...

I've just been trying to find the Venue review of your play (since I hear there's a good 'un) and stumbled across your nice comments. Well, 'tis true, I loved the evening and think it's absolutely vital to boost good work by talking about it in newsprint. So, I did.

Hope very much to bump into you sometime, Crysse, and talk Short Plays - I'm running Script Space at the Tobacco Factory with Ollie so am currently fairly obsessed with playwriting and the production thereof...
Soph (Lomax)