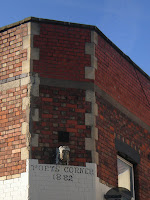 Emerging blinking into the sunlight from the nightlights of Bristol's theatreland, I find Bedminster shops are full of.... theatre. Trading Local is a Show of Strength initiative, using 19 shops to stage 5-minute monologues based on their own location and trade - each one repeated 3 times, so by scampering up & down North Street an ardent audient could catch them all. I didn't manage that, but the ones I saw were great: among them Bernard the table lamenting his lot at the antique shop (Oliver Millingham gave great voice to Matthew Oven's tale from beneath candlewick drapings) 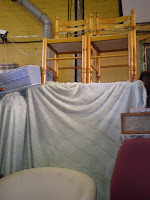 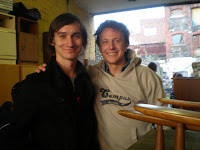 Tracy Wall's recreation of the Poet Butcher, a real-life character who sold doggerel along with faggots in the 19th Century, and Caleb Parkin's Units of Memory at Compuwave which took a poignant look at "life broken down into its componant parts." And I loved the reluctant tattoee musing on her graphic options, noting the sign on the door: "No Children, No Drunks - I should think that just about rules out anyone who wants to come in." Satiric comedy may seem easy; evoking warmth rather than a patronised stereotype isn't, but writer Joe Hobbs & performer Kim Hick succeeded. 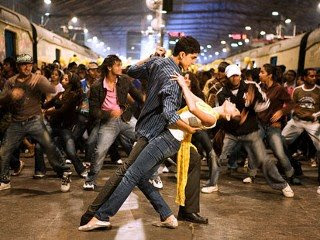 And as Slumdog Millionnaire scoops the ultimate award on Oscar night, my question is this: how can brutality & sentimentalism emerge as 'the feel-good movie of the decade'? Fabulous soundtrack I agree, with brilliant camera work, and great montage ending, but the storyline was thin as the characterisation and the fairytale is embedded in realism as bloody as the rags on the eyesockets of the blinded beggar boy.
It's complex, I know. I wouldn't begrudge director Danny Boyle his Tigger-bouncing moment of glory or Simon Beaufoy his credit for the screenplay, but you have to search to find the name of the original writer: Vikas Swarup. And over in India there are riots over the 'humiliating' term in the title.
But is it the dog or the slum that's the problem? A perspective from an Indian journalist in NYTimes insists that Its depiction as a slum does little justice to the reality of Dharavi... (which is) safer than most American cities. The crowd is efficiently absorbed by the thousands of tiny streets branching off bustling commercial arteries. Also, you won’t be chased by beggars or see hopeless people loitering — Dharavi is probably the most active and lively part of an incredibly industrious city. People have learned to respond in creative ways to the indifference of the state — including having set up a highly functional recycling industry that serves the whole city.
Promoting prejudice, creating misinformation - even fear of reigniting the violence against Muslims of 1992 so graphically depicted in the film.... so although the title itself is merely a slur from the bad-cop who turned good-cop, objections are not as simple as one online comment seems to think: "Tough Shit. They don’t have any money to see it anyway."

Censorship is also the theme of Chimes of Freedom, a Spoken Word event at the Merlin on March 19th featuring poems and prose by writers across the world who lacked - and lack - the luxury we see as our right: 'Freedom of Speech.' It's on behalf of PEN, and former president Victoria Glendinning is joining the lineup of local writers who'll be reading. If you're in the area, come along.
Posted by Crysse at 9:00 AM