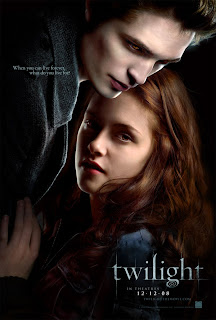 Twilight is a teen flick so obviously I went to see it for research purposes only, not for the charismatic allure of Robert Pattinson as a vegetarian vampire with super-hero skills and a passion for running up the tall pines of misty Washington forests with his girlfriend clinging on like a besotted backpack. Bella is the ultimate bored teen, so being sucked into a state of immortal sleeplessness is an irresistible lure, though that could be because the vampire gang are kindof the in-crowd at school, and Edward is especially good at biology although his mood swings kindof give her whiplash.
The blending of filmic conventions is actually quite well done, or maybe I have an adolescent longing for supernatural schizophrenia too. Edward initially attempts to explain his sudden superhuman strength as “an adrenalin rush – you can Google it.” Instead she googles vampires, and he comes clean.
“I’m the world’s most dangerous predator. Everything about me invites you in. And I’m designed to kill.”
“I trust you.”
“Don’t.”
But this is a love story, so of course she can... though not the other vampires, who turn a stormy baseball game into a showdown from The Warriors and then there's a car chase and a massive fight in a hall of mirrors... I hope I'm not spoiling the story for you. Go see it, there's too much rushing through misty forests and very little sex but an unexpectedly good end.

And after the best seasonal celebrations I've enjoyed for years, the news that Harold Pinter died on Christmas day. "The most original, stylish and enigmatic writer in the post-war revival of British theatre" mourns The Telegraph. "The most influential, provocative and poetic dramatist of his generation" says The Guardian. The Dumb Waiter , which I first saw in a student production in Northern Ireland, was my rite of passage into the power of contemporary drama. I admired his uncompromising opposition, undeterred by critical disdain, to the Iraq war - I had the chance to read his poem Where was the dead body found? at a PEN event organised by Victoria Glendinning last year, and was dead proud when Antonia Fraser told me Harold would have liked it and she would tell him about it.

Adrian Mitchell, too, chose the deep mid-winter to depart - as I discovered from Facebook status tributes. Only love can unlock locked-up love he wrote, unfashionably, when the trend to demonise inept parenting was just beginning in the 80s. I so agree.
..
Posted by Crysse at 10:00 AM