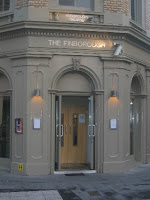 The Finborough Theatre has a reputation for staging great drama so I made the trip to Earls Court this week to see a revival of William Saroyan's Politzer-winning play The Time of Your Life. Somewhere between Altman's Short Cuts and an early episode of Cheers, it's billed as a comedy but the shadow of Second World War looms across Nick's downtown San Francisco joint where drunks, gamblers, whores, delusionists all wander in to show us their hopes and their loneliness. Twenty-seven of them, on a stage that spills across the auditorium so audience and actors share tables and pretzels. Nick runs his bar like a sleazy soup-kitchen, benign to all except the Vice Squad snoop: "How do you know the difference between a lady and a street walker? You're out to change the world from something bad to something worse."

With an ensemble piece like this, a fine cast is more important than a single star (though intriguingingly the wannabe entertainer who can't dance was played in 1939 by Gene Kelly) and Icarus Theatre had that. For me the only unsatisfying aspect was the ending, a flurried death off-stage, leaving it unclear whether or not there would be repercussions for this "profusion of wistful dreamers, lonely hearts, and beer-hall-philosophers".

But a dramatic ending is hard to write, as I'm finding. It's got to come from the characters, and they can be perversely secretive. I nicked this Harold Pinter quote from John Baker's blog. "I don't know what kind of characters my plays will have until they indicate to me what they are. Once I've got the clues I follow them. That's my job, really, to follow the clues."

And now it's nearly the longest night so in the words of poet Inua Ellams, I wish you all a Happy....
Solstice - Samhain - Yule - Saturnalia - Winterval - Hogmanay - St. Nicholas - Kwanzaa- Bodhi - Yalda - Hanukkah - Christmas.
..
Posted by Crysse at 6:30 AM