Outlook unsettled but magic still around

Let's start with a storm: the torrents sprayed wildly on the audience by wonderful Folksy Theatre  in Merlin's ECOS amphitheatre to get us all into the spirit of The Tempest on Wednesday evening. Musicians as well as actors, this endearing quintet held their audience rapt as they morphed between characters with speedy costume changes, from ethereal sprite & romantic lover to a couple of drunks, in the most impressively extreme case. 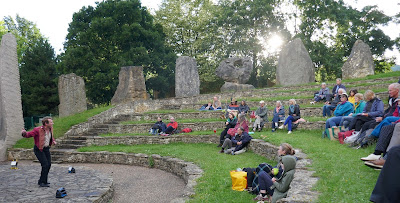 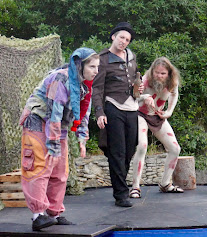 Shakespeare was all about patron-pleasing, and while Good Queen Bess loved the vulgarity of the Merry Wives and the man-teasing of Malvolio, her 1603 successor James I didn't: he wanted magic and masques, which aren't so easy to graft into a popular rom-com. Perhaps that's why The Tempest is the bard's last play: Prospero's breaking of his magic stick is seen as symbolic of Shakespeare's decision to create no more stage dramas after this one, believed completed in 1611. Folksy's production wisely minimised the gratuitous mythical set pieces and focussed on clarifying the storyline and maximising the comedy. 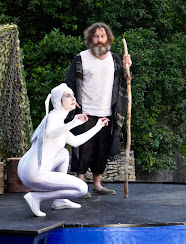 In both these aspects they did really well: Andrew Armfield was delightful as both Stephano the drunk and Ferdinand the lover (playing each with just a touch of Bertie Wooster), Ariel was enchanting and Miranda charming; Caliban as apparently an Ulsterman fresh from a brawl in his underwear was entertaining though without the poignancy sometimes found in this abused role, and Tom Hardwicke's Prospero was simply the best interpretation of this demanding role that I've yet seen anywhere. Huge credit to director Lee Hardwicke too. The audience sprawled across every level of the ECOS stones clearly loved it, and so they should: it was brilliant - well paced and full of energy and fun.  Here's Rachel Delooze as Ariel with her master, and as above as Trinculo with Stephano and Caliban (Gilchrist Muir).
While open-air theatre companies have had more chance to survive the last couple of years, problems for indoor productions have been intense and, despite some ingenious adaptations, most stage practitioners are having a really tough time. Acting For Others is the UK Actors Support Network and actor John Cragg runs a Youtube page of productions created to fund this charity for the industry. This week has the impressive addition of a zoomed reading of King Lear directed by Andrew Hilton, founder/director of the excellent Shakespeare at the Tobacco Factory company which, until he stepped down in 2017 after 18 years of high-quality productions, was always a high spot in my reviewing calendar. With a stunning cast headed by David Horovitch as the impetuous old king, this is so good that - even for nearly 3 hours - it's easy to forget that the boxed heads meet only in our shared imagination. Here's the self-deposed king at the start of his sufferings, losing his temper when reproached by his daughter and teased by his fool. 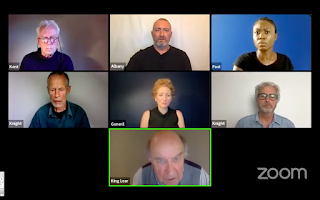 Eleanor Talbot's latest episode of Variations of a Theme has a focus on the Mind's Eye, and an interview with Pete Gage, previously best known as a fantastic keyboard player and singer - he was the voice of Dr Feelgood during the 1990s - who has now published a book of his poems and mandalas. His interview starts at 13.50 in (pausing for John Lennon's Mind Games at 26 minutes, and restarting at 37.00 -49.00) and is a fascinating account of Pete's creative sensitivity and processes, with a beautiful reading of his poem about Robert Schumann written in Bonn. Pete's readings show a sensitivity that may surprise many who know him mainly from his mega-popular blues band, and the mandalas are all quite beautiful - order from Pete here, or from Hunting Raven Books. 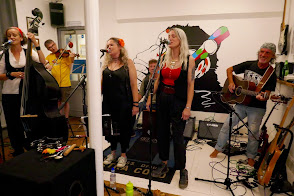 As we cautiously emerge into new national regulations, all balancing desire to maintain safe social barriers against the detrimental effects of isolation on our mental health, Frome's Sun Inn opened its newly-improved premises for a live gig from The Hoodoos. No dancing, seating spacey, masks worn at the bar, and the exuberance of this multitalented sextet all combined to make this one a must-do for me.  Live music is the life blood of our community, it seems, and as the long sunny evenings wane it will be hard to resist such events.
In fresh air again on Sunday for 'Open Gardens' day in Nunney village giving access to some splendid vistas: Eleanor and I travelled with Gordon Alexander and another friend to tour twelve of the superb gardens listed, choosing Midhurst as our favourite for its  layered layout, vibrant colours, and its feisty feline incumbent - but all of them really were gorgeous. Our trip was top'n'tailed with cake & tea in the church at the start, and excellent Sauvignon in The George before we headed homeward at sunset. 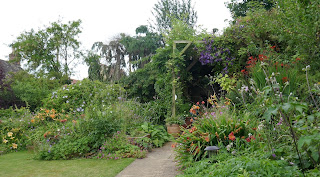 Concluding this week of dark clouds as well as sunshine with a look back at the Frome Festival at the start of the month, inspired by a great set of images sent me by official photographer Alan Denison - here's wonderful Liv Torc leading us off with me giggling in the background - and his fellow Frome Wessex Camera Club member, David Chedgy who caught the set-off moment of the Slavery Sedition & Sin walk around Frome, effectively led by historian David Lassman with me chipping in from time to time.