Illyrian romps, a posse of bibliophiles, & a splash of music 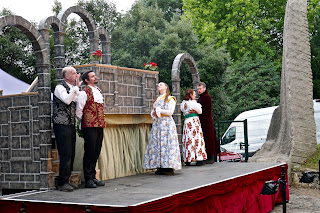 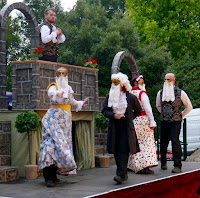 Outdoor theatre is again the feature of the week: Illyria, active again after a difficult summer last year, has several productions on tour and on Thursday a multi-tasking quintet arrived at Frome's ECOS venue to take on Much Ado About Nothing.  The amphitheatre was virtually full for this production, impressively set and lit, with all 20 of the play's characters vividly created by three men and two women. As Elizabethan productions were single-sex, Chris Wills as a hirsute lady's maid sort-of followed tradition, but Nicola Foxfield taking on jilted Claudio as well as feisty Beatrice was impressive. Rachel O'Hare as Hero, the insulted bride, also portrayed her elderly uncle, and Chris Laishley enacted evil Don John as well as the benign Governor of Messina, where the action occurs in a party atmosphere following a successful campaign. 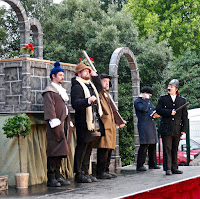 Nobody could call Shakespeare's comedies anodyne. The seventeen plays placed in that category include themes of antisemitism, domestic abuse, assault, abandonment, betrayal and murder, so in this drama Claudio's savage rejection of Hero on their wedding day is fairly mild, although his initial indifference to her demise does suggest some lack of empathy.  Fortunately there's no time to worry about that as the action moves on to another popular theme of the bard's: the looney-tune lower-classes, and Illyria delivers their antics with extra relish.  The focus is on laughter: David Sayers relishes the affectations of Benedick as much as the antics of the Watch who chaotically foil the dastardly plot.  Oliver Gray's production cleverly established a convention of imaginary directional space in the opening moments of the play, and made the most of the absurdity of the garden scene where the match-making plot to bring Beatrice and Benedict together is hatched. Basically, there's much to enjoy whether or not the plotline always emerges, and the company's excellent programme gives a clear synopsis. Much Ado has been claimed by Hollywood as the original screwball romantic comedy, and it's always a pleasure to see different emphases in a stage production. 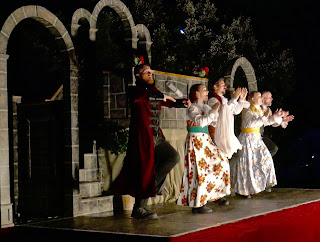 As a personal postcript: In the days when a 'standing seat' bought on the door for 2/- at London's Old Vic meant you could take any seat still vacant at curtain up, in 1965 I saw Franco Zeffirelli's production of this play with a cast including Ian McKellen, Albert Finney, Derek Jacobi, Maggie Smith and Lynn Redgrave... the garden scene, when even the ornamental sculptures shimmered forward to eavesdrop on the love-plot, is probably one of the reasons for my enduring passion for live theatre. 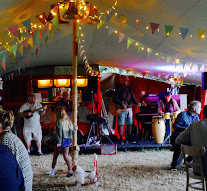 Sadly, the English summer couldn't manage more than a few pleasant days this week, and by the weekend had swapped summer showers for downright deluges. On Friday evening we defied the elements in search of live music at Critchill Manor Estate, a fairly new camping site on the southern outskirts offering a tented bar with a band open to drop-ins, and on Sunday the heavens opened again for the Frome Lions Summer Fete in Victoria Park: the big chutes and and bouncy apparatus continued to be splashily popular with the saturated children while their elders clustered under trees with hot drinks. 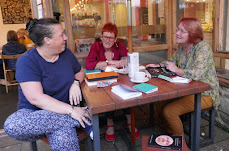 Sunday evening saw the return to (fortunately dry) real space of Proof Pudding Club, the inspired innovation  of Hunting Raven Books' manager Tina Gaisford-Waller, originally meeting monthly at the Cornerhouse to discuss upcoming titles and for the last year continuing on zoom. Our new venue is River House, in its new location at Black Swan Arts. Spreading across the courtyard as well as the indoor cafe, about thirty volunteers appraised new titles and chatted with coffee and cake in animated small groups, reporting back at the end of the evening. Here's my group: Liz, Naomie, and Nicki, deciding that Silent Earth by Dave Goulson, a warning of imminent insect apocalypse, was our pick of the night.

Ending with thanks to etymologist Susie Dent for providing a word that explains and excuses my morning indolence in a week of disappointingly non-seasonal weather: Hurkle-durkling: 19th-century Scots for lounging in bed long after it’s time to get up.