The scrapbook edition: sunny walking, and talking about theatre 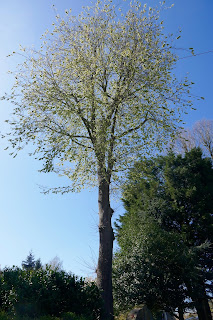 Picture of the week was a tough choice now that sunshine and car-repair allow a wider range of walking as spring brings bluebells and wild garlic along the paths and may-blossom dazzling in the hedges, with birdsong everywhere. Frome market yard on Saturday was a pop-up picture-book of enticing stalls, with creative crafts as well as food and flowers. Irrelevantly, but a new discovery to me, this majestic elm not far from the town centre is probably the last local survivor of the 1960s Dutch elm disease blight that killed off an estimated 20 million trees in the UK. Constable was mad about elms: his famous landscapes are thick with them and the V&A has a painting of an elm trunk by him that looks exactly like a photograph - you can see it here.

As indoors venues are still off-limits and sunshine is enticing, the only performance to report this week is A Winters Tale from the Royal Shakespeare Company on BBC4. Although officially regarded as a romance and one of Shakespeare's comedies, the storyline is very dark.  A sad tale's best for winter, declares the little prince: his mother is thrown out by his deranged father and he dies of grief, so you could say he got what he wanted, but transposing the action to the 1950s & '60s - despite some powerful tableau moments and jolly revelry in the second half - doesn't alter the grim storyline and resolution takes nearly 3 hours with much angry shouting and that famous death by bear-pursuit. This BBC Lights Up production is available on iPlayer here, with a more comprehensive review here, and a couple of screenshots of from the opening and final acts. 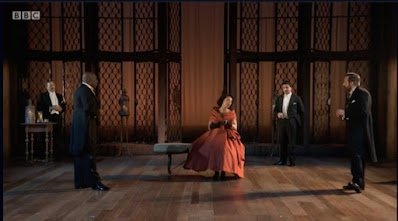 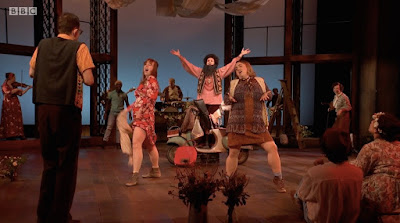 Speaking of the bard's works, Shakespeare at the Tobacco Factory has issued a series of podcasts focusing on the speculation What Would Shakespeare Do? in a pandemic, comprising recitations of speeches that have uncertain relevance and interviews with Bristol residents about their dreams and opinions. The first two - both out now - are quite niche, in a Home Service way, but free to listen here.

National Theatre more entertainingly offers filmed conversations of Life In Stages, with episode 1 on Thursday featuring its Artistic Director Rufus Norris talking with actress Olivia Colman. There's no attempt to make this seem an informal chat at a casual encounter, and both seem a bit uncomfortable out of their professional role, but the rapport is good, and interesting insights emerge about the apparent glamour of their profession - both admit to stress, and familiarity with 'imposter syndrome'.  Insightful and interesting - you can watch the series here. 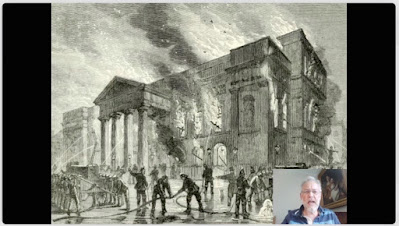 Also free, static but very well illustrated: a Webinar talk on London Theatreland from Andrew Warde, swooping entertainingly through the history of the city's 241 buildings, their owners and designers, their dramas and dramatists, their technicians and traumas, plus a peppering of spicy anecdotes. Our oldest theatre now is the Bristol Old Vic (opened 1776) but the first was built 200 years before that by Richard Burbage, and playhouses have survived closures for plague and civil war, often rebuilt after fires - they often burned down as stage lighting was by large candles until Drummond's 1816 invention of 'limelight'. The entire talk was crammed with fascinating detail and tasty soundbites - Samuel Pepys' view of A Midsummer Night's Dream at the Kings Theatre in 1662, for instance ("The most insipid ridiculous play I ever saw in my whole life,") and Sheridan's response when reproached for drinking as in 1809 he watched the Theatre Royal Drury Lane ablaze: "A man may surely be allowed a glass of wine by his own fireside?" A fascinating dramatic time-tour from Mirthy - worth checking out their topics.

Clare Reddaway, playwright, fiction writer, and since lockdown organiser of the Storeopathy online fiction events currently has a story with the Tempest Productions story project: Living in the Shadow of Venus, a delightfully quirky and satisfyingly upbeat tale of our times. Clare would have been one of the writers in I'm Talking to You, the planned event by Nevertheless Pub Theatre for the Frome festival last year.  It hasn't been possible to revive this project for 2021but there's plenty of good stuff in the offing for the festival's return, with a Frome Poetry Cafe session in ECOS, the town's famous amphitheatre - look out for more details of a whole raft of other events coming soon.

Still with words: this week has been a good one for me, with the conclusion of a poetic project - wonderful to reconnect zoomily with my Live & Lippy partner Hazel Stewart for this - and the start of a fiction-related one. Partial release from lock-down still feels strange, neither total freedom nor the seclusion that allowed us - me anyway - to indulge in private pastimes like jigsaws, painting, online games and reading.  Several irresistible books are still as yet unfinished: the brilliant Book of Trespass and Who Owns England now joined by The Assault on Truth, countered by the optimism of Human Kind, and the compelling, sad, funny, account of his journey to death & back by Michael Rosen: Many Different Kinds of Love.  For a daily dip into etymology there's Susie Dent's Word Perfect (word of the day today was guillotine, which despite its menacing connotations was actually introduced in 1792 with the aim of reducing the unnecessary suffering of botched-job sword and gallows executions.)  Final footnote: if you go to this website and paste in a paragraph of your own work, you receive a comparative analysis of your writing style. Apparently my fiction is like award-winning novelist David Foster Wallace, while my non-fiction is more Arthur C Clarke, noted for his sci-fi. I tried to catch it out with an obscure chunk of Salinger, but it wasn't fooled, so maybe there's something in it...

Always a good read....some local live music will be back soon an Crysse always covers all the basses ( and other instruments) in her blog

Paul said...
This comment has been removed by a blog administrator.
7:10 PM