Southampton's Art House continues to find ways to share entertainment and this week offered After Shakespeare, a quartet of monologues created and performed by Lexi Wolfe. Weighing in at 2½ hours zoom-time this was quite a heavyweight session but raised intriguing questions about the bard's plays: what was Hamlet's relationship with Laertes? Why was Lady Macbeth so avid to see Duncan dead? How did Portia really feel when her betrothed failed to recognise her in barrister's disguise? Was HenryV heroically brave, or pathologically vicious?

Taking tiny clues and clearly with intensive research as well as imaginative intuition, Lexi explored these and other depths, creating a sense of interactive listening without too much of the 'what's that I hear you ask?' device. Setting the four characters does take some time, but the reveries are all provocative & interesting. Here's Portia, the chat-line's favourite. 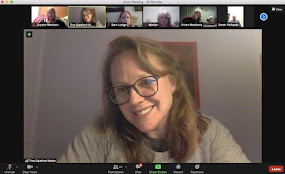 Sunday evening saw the return of the famous Proof Pudding Club initiated by Hunting Raven Books manager Tina Gaisford Waller, held on zoom since live book clubs and actual pudding-sharing have both been off the menu. Tina's very good at picking new titles that will intrigue, and this busy session covered a wide range, with Tina as host choreographing our contributions: The Dictionary of Lost Words by Pip Williams, inspired by the discovery that the word 'bondmaid' was discarded by the compilers of the first dictionary, and Jackie Polzin's debut novel Brood emerged as fiction front-runners. 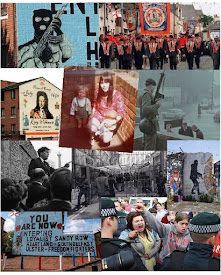 My last post pledged to avoid the politics of Northern Ireland, but last weeks news stories are inevitably my main preoccupation.  The Assault on Truth, Peter Oborne's exposé of the UK's catastrophic decline, charts the ruthless sacrifice of Northern Ireland by our mythomaniac prime minister: newspapers are focusing on the rioters but my thoughts are with the individuals & families living in cities on fire. Hobnob Press published my novel The Price of Bread, about living in the fringes of similar 'Troubles' fifty years ago, with this press release: ‘This powerful evocation of a fractured and dystopian society may be read as history – an insider’s chilling recollection of a conflict which most people not directly involved failed to understand, and saw unfold with incredulity. But it can also be read as a warning to be heeded: the anger and hatred, suppressed for decades, never went away. It could and quite possibly will return – it may even now be reigniting.’ It's a distressing thought. Thanks to those who sent comments - they're on my novel's Facebook page here - and my piece was published on American online journal Medium last week. Credit David Goodman for this compilation created for my website. 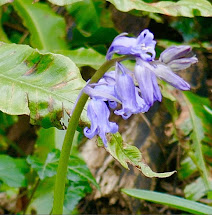 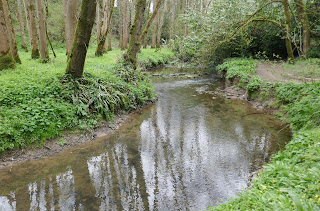 On a more upbeat note: last week's sunshine allowed more walks along paths where the green carpet of wild garlic leaves will soon be a forest of white blossom: in the meantime, there are violets and celandine, wood anemones and primroses - and the first bluebells are already showing. so I'll end with that happier thought as we edge gingerly towards the first steps of what we once called normality.

Email ThisBlogThis!Share to TwitterShare to FacebookShare to Pinterest
Labels: After Shakespeare, bluebells, Proof Pudding Club, The Price of Bread