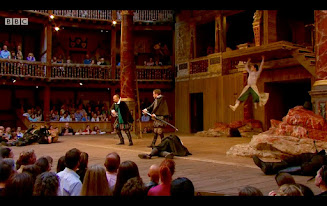 Culture in Quarantine! With the encroaching sense of quasi-normality I'd forgotten about the streamed theatre promised throughout the summer.  It's now nearly September, so these magnificent productions by RSC and the Globe will all disappear like the sprites in a Shakespeare play very soon, so check them out here. My pick this week was The Tempest from 2013, directed by Jeremy Herrin. It's the bard's last work, so the bawdy intrigues and innuendo that Queen Lizzy had enjoyed are replaced by the fantasy theme preferred by his new patron James I, and the breaking of the magic wand at the end, signalling Shakespeare's own creative finality, has been seen as the writer's formal resignation. Performances are all good, of course, and so are the renaissance costumes, and there's a big emphasis on magic and illusions. 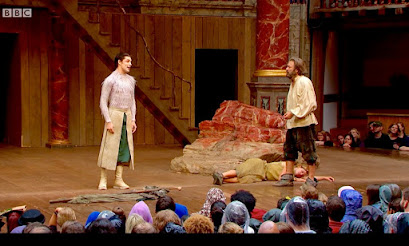 The two non-humans indigenous to the island, Ariel and Caliban, are always a challenge: sometimes they're played as opposite aspects of the same mysterious energy but in this production Caliban scampers around like a little red rooster while Ariel wearing a long white coat and quiet dignity seems more minder than servant to the extravagant frenzies of his overlord. Programme notes suggest this is a story of 'forgiveness, generosity and enlightenment', but Roger Allam's hot-tempered brooding Prospero reinforces that it's more about revenge than redemption: even though the lords sail off with honours restored, the servants all suffer for their brief aspirations. But Shakespeare does compensate poor abandoned Caliban by giving him the most poignant speech in the play: 'Be not afeared, the isle is full of noises: sounds and sweet airs, that give delight ....when I waked, I cried to dream again. 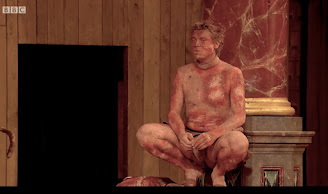 Still with words:   Poets Prattlers and Pandemonialists, who must be among the most hardworking wordsmiths in the country, offered no less than three zoom performances on Sunday.

In the 7pm slot Emma Purshouse introduced us to a selection of characters from the Black Country, where this entertaining posse are all based,  while Steve Pottinger interspersed his local-character pieces with poems from lockdown. Poignant, witty, and even hopeful, these affectionate glimpses all have a warm humanity - I especially liked The Glass Collector, which you can read here - among other powerful poems by Steve. 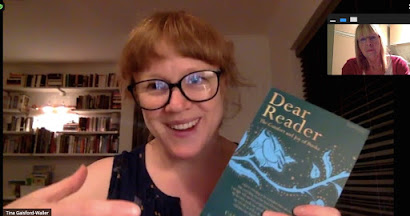 Also zooming: Hunting Raven Books's manager and Frome's shimmering star of literary conviviality Tina Gaisford-Waller chaired another meeting of Proof Pudding Club, the monthly event for avid readers to enjoy discussing book previews over dessert, though camera clips showed more glasses than spoons on this occasion. An entertaining couple of hours, with main recommendation of the night going to Small Pleasures by Clare Chambers, commended as a contrast to sombre times too often reflected in book lists: "The Booker long list this year is the most depressing I've ever seen," as Tina put it. Here's Tina with her pick of the month: Dear Reader - a book about the comfort and joy of books by Cathy Rentzenbrink. 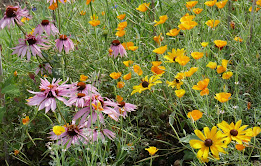 Hauser and Wirth's famous gardens are notoriously impressive in late summer - there's an interview with the garden's designer Piet Oudolf here - so a trip to Bruton seemed a great idea when the sunshine returned on Monday. It turned out that's the one day the gardens are closed, but the floral displays in the allotments on the other side of the path also provide sensational 'drifts of rich late-colour summer in climactic display' - and the town itself is full of quirky lanes and skylines - including the famous dovecote. 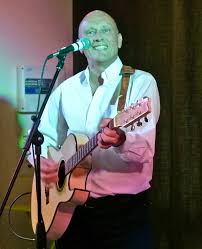 Ending this post with the careful return of live theatre. Billed as outdoors on ECOS but transferred within the Merlin on Friday night due to blustering gales: Shakespeare Rattle and Roll from multi-talented musician & performer Martin Dimery in the guise of a lecture on the bard's lyrical stylism but actually a fantastically entertaining romp through the key musicians of our times. From evolving Macbeth's witches' trochaic tetrameter into rap, to creating Mick Jagger as Puck,  this is a vastly entertaining - and very informative - survey of our major music icons - including Elvis, Dylan, Sex Pistols, Sting, and obviously the Beatles -  in a fantastic tribute to not only the bard but every music trend this century and the last. This is the third time I've seen this show,  it's that good.
-
Posted by Crysse at 10:34 PM